Fort Knox, Ky.–The Tactical Operations Center (TOC) is coming to the end of their preparations for Cadet Summer Training (CST) which will provide a well-run experience for the Cadets.

The TOC is staffed by Cadre from different states who are stationed at Fort Knox for the summer for CST. They run the day-to-day operations of Advanced and Basic Camp. 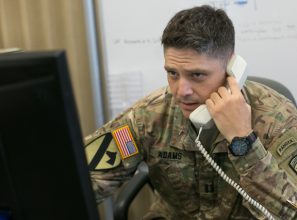 Capt. Evan Adams from Maverick Battalion, a Military Science instructor at University of Texas-Arlington, stressed the importance of being a cohesive unit. He said, “People come from all over the states, so we really have to integrate amongst each other.”

Adams said that they will be accountable for 7,100 Cadets throughout the summer and a big part of their job is to make sure everything runs smoothly. This year in particular is one to watch out for due to the addition of the Buddy Team Live Fire and Live Hand Grenade events.

When asked about whether or not Adams was worried about the addition of these events he said, “We constantly undersell these Cadets.” He stated that they are all adult volunteers who want to be a part of the Army and are capable of doing their job.

However, Pfc. Daniel Dunlap from 5th Brigade had a different opinion. Dunlap’s job is to listen to the radio for weather and urgent alerts. He said that these new events will have him a little worried because it’s his job to worry. “These Cadets are new and some of them have never fired a gun before.”

Dunlap followed that statement up with reassurance that the TOC is very prepared for any situation. He said that since he’s gotten to Fort Knox the TOC has “done several rehearsals of made up situations.” This ensures that they are as prepared as possible to look out for the safety of the Cadets. 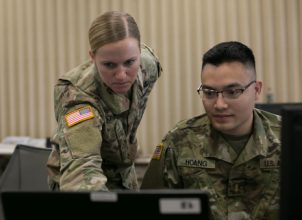 2nd Lt. Jane Summers, who commissioned May 5 of this year from the University of Montana, said that she is jealous of the new Cadets, “We didn’t get to do the Buddy Team Live Fire or the Live Hand Grenade.”

Summers said that she isn’t worried about the new Cadets. “We have a good set of trainers out there who have been rehearsing and running through the events and will be very prepared.”

Overall the mood in the room is extremely positive and they are excited to get things started here at Fort Knox.

Get On My Level