The Cultural Understanding and Leadership Program (CULP), a part of Cadet Summer Training for U.S. Army Cadets, was designed to immerse Cadets in the culture of another country to understand the lifestyle of those who live there and work alongside that country’s military. This year, the CULP office is maintaining the same important purpose of the program while changing the name – Cadet Coalition Warfighter Program (CCWP).

The name change is a result of a misconception of the program’s ultimate goal. While cultural understanding is a large part of the program, there is much more involved than tourist activities. The greatest reason Cadets are sent abroad is to build positive military to military relationships. The new name – Cadet Coalition Warfighter Program – is meant to emphasize the importance of these military connections.

Maj. Leslie Graham, officer in charge of CULP/CCWP detachment, said this program is especially beneficial to future lieutenants to understand how our country and military interacts with others. When they become leaders during deployment, they already have experience interacting with coalition partners. 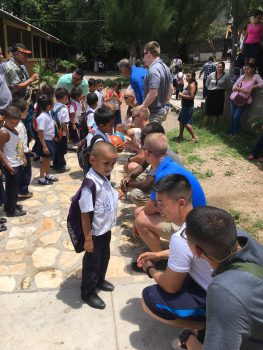 Cadets from Team Three and Four visit the children at the Escuela Juan Ramon Cueva de Primera in Copan to hand out treats and toys.

“The same solutions to a problem that you would apply here don’t necessarily apply in that country and that culture,” Kadetz said. “It’s totally different.”

Cadets typically spend 37 days in one of the 25 countries involved in the program. Some countries associated with the program are Brazil, Honduras, Guyana, Nepal, Estonia and Romania. Most of the areas Cadets travel to are impoverished, so they are totally immersed in the lifestyle of the locals.

Air Force Senior Master Sgt. Eric Storer explained how CULP/CCWP is not the same as a study abroad or a vacation.

“They’re not just there sightseeing,” Storer said. “They’re actually integrated into the military, into society. They eat the same food that they eat, they use the same currency. A lot of times they’re embedded with their military, so they are living in the same conditions that their military lives in.”

Cadets could be assigned to work with other countries’ military service academies or their infantry schools, as well as spend time learning about the functions and history of the embassies in country. It’s also important for Cadets to become familiar with the other country’s weapons and machinery. On top of that, they could do humanitarian projects. For example, they could go to orphanages or clean up beaches.

Cadet Winston, University of Dubuque, shooting an AKM with the assistance of the GDF Special Forces on July 18. During the cadets time at Takama, they partnered with the GDF in order to gain an understanding of their military life. (Photo by Cadet Soren Defoor)

According to the CULP staff, it’s common for Cadets to return to America with a whole new

perspective. They gain an understanding of the struggles of the populations in poorer countries and the difficulties their militaries face.

“They transform,” Storer said. “They come in not knowing anything about the country, not really knowing how to deal with anybody from another country. When they come back, they’re just a whole different person.”

Another great benefit of this program is having first-time deployment experience. Cadets go through the entire deployment process. They start preparation for their travel six months in advance. This can be immunizations, studying and training requirements.

After this preparation, Cadets come to Fort Knox, KY for more briefing before traveling.