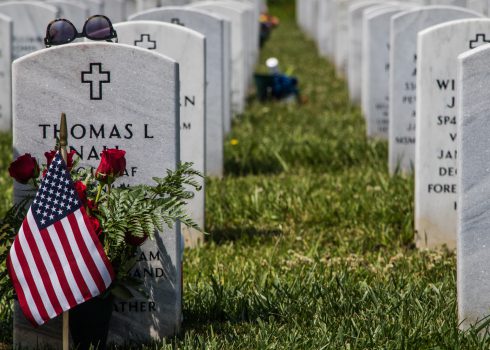 Families place flowers on the graves of loved ones for Memorial Day during an annual ceremony at the Kentucky Veterans Cemetery — Central May 27, 2019, hosted by Fort Knox and the Kentucky Department of Veteran Affairs. Many families enjoyed the company of one another, prayed and spoke near the graves and honored all those who have served. | Photo by Madeline Grosh, CST Public Affairs Office

The ceremony opened with music from the Ladies of Liberty, followed by The Star Spangled Banner by the 100th Army Band (USAR).  Chaplain Maj. Jonathan Lee gave a short invocation before Maj. Gen. Frank Muth spoke the publics.

“Memorial Day is a time-honored commitment to never forget those who served and sacrificed for our country; and today in this place, we do that once again, addressed Muth. 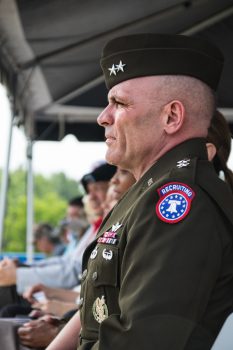 Maj. Gen. Frank M. Muth prepared to give the Address during the Memorial Day Ceremony in Radcliff, Ky May 27, 2019. | Photo by Jodi Moffett

Muth, who took command of U.S. Army Recruiting Command at Fort Knox in July of 2018, gave a heartfelt speech about what Memorial Day truly means to Soldiers and their loved ones. He also addressed the sacrifices made by Soldiers dating back to D-Day, relating their heroic actions to those of today in Iraq.

Shortly after Muth addressed the public, two Human Resource Command (HRC) Honor Guards presented the Folding of the Flag.  Though many believe the thirteen folds represent the thirteen original colonies, each step actually has a very separate and distinct meaning.

The first fold of the Flag is a symbol of life, the second fold is a symbol of our belief of eternal life and the third fold is made in honor and remembrance of the veterans departing our rank, who gave a portion of their lives for the defense of our country to attain peace throughout the war. 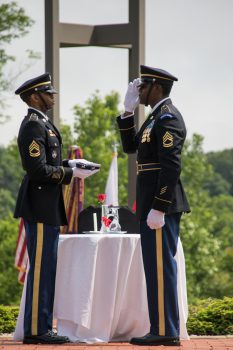 Soldiers from the U.S. Army Human Resources Honor Guard during the folding of the flag at the Memorial Day Ceremony in Radcliff, Ky. May 27, 2019. | Photo by Jodi Moffett

The ninth fold is a tribute to womanhood and mothers, for it has been through their faith, their love, loyalty and devotion that the character of the men and women who have made this country great have been molded.  The tenth fold is a tribute to the father, for him too have given his sons and daughters for the defense of our country.

The eleventh fold represents the lower portion of the seal of King David and King Solomon, and glorifies, in Hebrew’s eyes, the God of Abraham, Isaac, and Jacob.  The twelfth fold represents an emblem of eternity and glorifies, in the Christian eyes, God the Father, the Sun, and Holy Spirit.  The thirteenth and final fold, when the flag is completely folded, the stars are uppermost, reminding us of our national motto, “In God We Trust.”

The crowd stood and showed respect to the Flag as twenty-one gun cannon salute was fired off in the distance.  HRC Honor Guard marched to the center of the ceremony, representing hats from each branch of the military.  Once positioned around the POW/MIA table, an announcer began explaining the different elements of the Fallen Soldier Table and what they represented. 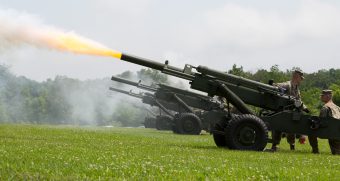 Soldiers of the 19th Engineer Battalion conduct a 21-round cannon salute as a part of the Kentucky Veterans Cemetery Memorial Day ceremony, Radcliff, Ky. May 27, 2019. | Photo by Kyle Crawford, CST Public Affairs Office

After the laying of the wreath, the 100th Army Band played Taps followed by America the Beautiful and each of the Armed Forces Medleys.

“Since I become a senior NCO, there has not been one year that I haven’t lost a Soldier.  It is very important that we recognize our Soldiers and their families.  We have to keep strong for them and lead them well into the future.  Ceremonies like this recognize their efforts and again, their sacrifices,” explains Gavia.

If given the chance to talk to any of the fallen Soldiers buried at the Veteran’s Cemetery, Muth and Gavia had some very strong words to say.

Muth answered, “Your memory of what you did and what you sacrificed will never be forgotten and will always be held true on days like this where we come together to recognize what you did for our nation, and what our Soldiers, sailors, airmen and Marines continue to do to keep our freedoms and to keep our way of life in America.”

“We miss you,” said Gavia as she began to cry.

Mentorship leads to success at FTX