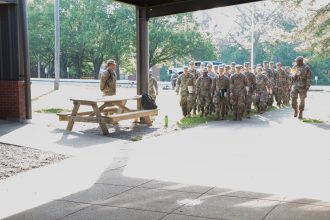 Cadets and Cadre members alike are excited for the coming days ahead.

“I am the most excited for the hand grenade range,” said Cadet Jacob Ratton, from Northern Michigan University. “I have never thrown a hand grenade before so it should be a good first experience.”

Live hand grenade training is being added to Advanced Camp for the first time ever this summer. The training was added so that Cadets will have the same training as the enlisted Soldiers they will be leading as officers.

Ratton said that these past few days have been a little crazy.

“It has been pretty hectic the last couple of days just trying to get to know each other and get people names straight,” Ratton said.

Cadet Isabella Rosa is excited to meet other Cadets and form connections and friendships.

“Cadets are here from all over the country and schools we have never even heard of all together in one place, so it is cool to see how everyone was taught and how everyone trained before coming here,” said Rosa, from State University College at Brockport. 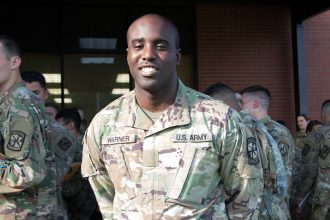 Despite various emotions surrounding the beginning of Cadet Summer Training, all the cadets are here for one reason.

Cadets are not the only people excited for the Advanced Camp experience. Cadre members leading the camp are also looking forward to the summer.

“I am pretty new to the ROTC teaching,” said Capt. Brandon Groller, a Platoon Training Officer. “I’m really excited to get out there and learn how we evaluate Cadets and actually put it to use so I can go back to the University of Michigan, where I teach and actually teach my Cadets what they are looking for at camp.”

Along with the excitement and anticipation of getting to work with hand grenades and meeting new people, the Cadets also have a few concerns.

Warner stated his concern over the lack of showers in the field.

“I’m least excited to be in the field for 21 days. It is very taxing and I am used to showering and doing everything that you get accustomed to over the year and now I am ‘gonna’ be in the field,” he said.

Ratton is more concerned with scoring high on the Army Physical Fitness Test (APFT), which he and his teammates take on Sunday.

“I am least excited by far for the APFT,” Ratton said. “The importance of doing all this well-rounded testing is to make a complete leader which will make a more effective leader environment.”

The Kentucky heat and humidity are a concern shared by both the Cadets and Cadre.

Groller said he was not looking forward the Fort Knox weather.

“I am prior service and I was in Oklahoma for a little bit and Fort Knox reminds me of that,” Warner said. “It’s nice, Kentucky is hot but I am definitely motivated to finish through with this.”

The Significance of Senegal for CULP Cadets