Fort Knox, Ky.– Call for Fire is a simulation training event in which Cadets are taught how to call in artillery fire on an enemy.

The training begins with a 45-minute classroom session. After that, Cadets are given the chance to practice before being given a written exam. 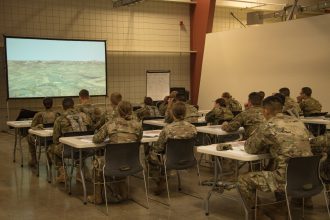 Cadets from 1st Regiment Advanced Camp watch a simulation during their Call for Fire training on May 28, 2019 at Fort Knox, Kentucky. | Photo by Reagan Zimmerman, CST Public Affairs Office

“We start from the beginning and we give them 45 minutes on how to employ artillery fire,” Maj. Ryan Kurris said. “Within the next hour or two we give them a practical exercise and a simulation using artillery fire to adjust on to a target and then we test them to ensure they learned the right way to do it.”

“It is important because it is a system to properly employ on the battle field and for leaders to recognize all of the systems in our army and how to make them work.” Kurris said. 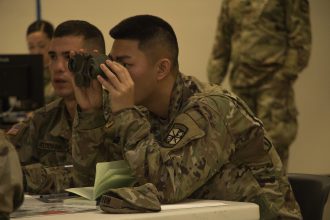 Cadet Andrew Wang of Seton Hall University uses binoculars to judge the placement of the Call for Fire during their training on May 28, 2019, at Fort Knox, Kentucky. | Photo by Reagan Zimmerman, CST Public Affairs Office

“I think that it is actually pretty interesting, it is really fun being able to see in the simulation when your random guess based off what you saw on the map is able to hit the target,” Cadet Alex Jaques, from Columbus, Georgia, attending University of North Georgia, said.

Another Cadet, Donnovan Rommel, from Gig Harbor, Washington, attending University of Arizona, said that he enjoys the Call for Fire Training because it will have a major impact on his future.

“I enjoy it, it is a lot of math and helps you terrain associate which will also help with land navigation and is really applicable to real life scenarios. “

Kurris said he enjoys the training for several reasons. 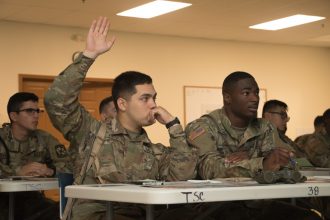 Cadet Andrew Dietz (left) of California State Univeristy, Fullerton, raises his hand to answer a question while Cadet Eric Jones (right) of the University of Tennessee, listens to the instructors question during 1st Regiment’s Call for Fire training on May 28, 2019 at Fort Knox, Kentucky. | Photo by Reagan Zimmerman, CST Public Affairs Office

He also enjoys interacting with Cadets.

“You get multiple perspectives from each person and different backgrounds. They bring a new way of looking at things,” Kurris said.