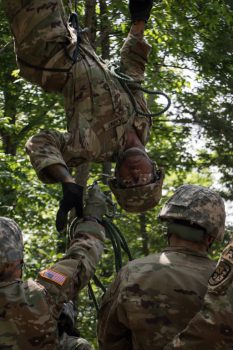 The FLRC is completed within the first few days of Cadets arriving on base. The main goal of this exercise is to create a bond between the members of each squad. The squads participate in challenging obstacles, working together to complete the given task.

Each squad consists of about nine Cadets who only just met two days ago. The squads must learn how to communicate and work together to be successful in the FLRC.

Sgt. James Whitehead was responsible for the safety of Cadets as they attempted Obstacle Two, the Barrel Roll. He said FLRC is the first real chance for Cadets to work on several different strengths as a squad.

“FLRC is an opportunity for Cadets to work for the first time as teams and to work on leadership, communication skills and problem-solving skills,” he said. “They’re getting an opportunity to try and figure out how to work with people they don’t know.” 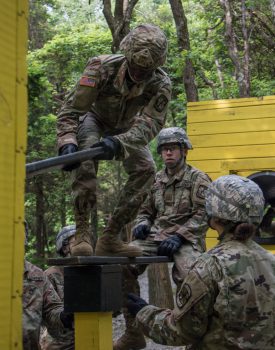 The obstacles throughout the course can require physical strength, critical thinking and cooperation. Paris Randle, a Cadet from Jackson, Mississippi, said his squad worked well with communication but lacked speed.

Randle was one of the first Cadets to get across the Double Culvert obstacle. The objective was to get the entire squad and supplies across two raised culverts without touching the ground or anything painted yellow. They were only given two wooden boards to get across two platforms between the culverts.

“It was an easy challenge, but we just had to move a little bit faster,” the Jackson State University student said. “We accomplished the mission but didn’t get all the Soldiers across. Overall, it was a fun challenge that allowed us to think as a team and communicate which is very effective in the actual Army.” 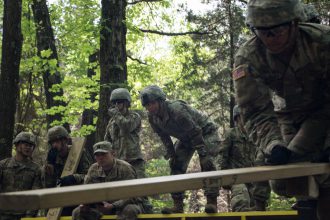 There is a randomly selected squad leader for each challenge. This builds leadership skills and shows officers which Cadets are successful leaders in the squad. Brittney Bauer, a Cadet from Murfreesboro, Tennessee, was given this role for an obstacle called Destroyed Bridge.

Bauer, a Middle Tennessee State University student, lead her squad as they attempted to get across three platforms by using different sized boards. They had to place the boards on platforms to get themselves and a heavy barrel to the other side.

“I think the most difficult thing is I didn’t really know how to do it,” she said. “Nobody knew how to do it. They kind of put me in charge. I really wanted more input rather than just me planning it on my own because this isn’t stuff we do every day.”

As the Cadets continue Advanced Camp, they will have many more chances to improve as a squad.

Faith in the Field