“It was pretty long, but I think my school trained me well to do a course like this,” said Cadet Bryce Sanford, from the Virginia Military Institute. 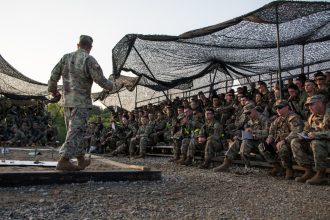 1st Regiment, Advanced Camp Cadets await their instructions before they find the different plot points for Land Navigation. Land Navigation is a key component to Cadet Summer Training. Cadets must find 3 out of 4 points to pass the course. | Photo by Jordyn McCulley, CST Public Affairs Office

“We do a lot of work at Fort Pickett where the Land Navigation courses are about the same size and the same terrain, so it was kind of familiar to me,” he continued.

Sanford was one of the first Cadets to finish the Land Navigation test, and said he enjoyed this assessment.

Cadet Jordan Pineault from Stephen F. Austin State University said, “Cadre gave us our maps, and we plotted the points. I personally walked down the roads, and once I got where I wanted to get into the brush line I shot my azimuth.

“I calculated what distance I needed to go, and once I got to that distance, I looked around, and my point was generally in my area.” 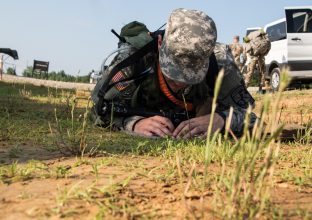 Pineault’s school does a land navigation twice a semester, and he has been in the program for two years. Overall, Pineault said he has done land navigation around eight times.

Pineault successfully located all four points, and was one of the first to finish.

Sgt. Jonathan Shryock, based out of Fort Carson with the 3-61 Cavalry Regiment, 4th Infantry Division, thinks land navigation is gets easier with practice.

Shryock has been doing land navigation for eight years and said, “The hardest thing that I have seen over the years, is probably people trying to do straight azimuth when there is a bunch of hills.” This can throw off a Cadet’s steps.

He feels this is an important skill since, “Cadets will be leading convoys overseas so they should be able to make those tough decisions of where to go instead of just relying on electronics.”

Sanford used the roads and basic terrain association method. He said, “It was nice to get back into the grove of doing what I know how to do.” 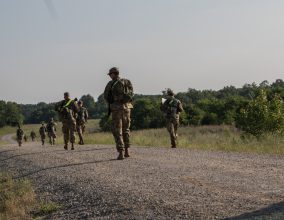 1st. Regiment, Advanced Camp take off to find their points before they run out of time. | Photo by Jordyn McCulley, CST Public Affairs Office

Sanford also felt that he did not need a compass or pace count because, “you can use the points in the road and breaks.”

“I do not think I went for a point more than 50 meters inside the wood line, so it was pretty easy. I had a pretty good lane,” said Sanford. “I basically did a lap around the course and certain breaks in the road I just stopped at and recognized, shot an azimuth in the woods, walk 50 meters into the woods and just go.”

Sanford said this skill test shows a Cadet’s “warrior skills and is one of the oldest Soldier skills you need to know.”

In order to pass the land navigation test, Cadets must locate three out of four points. If a Cadet does not get at least three points, they are able to try again the next day.