Fort Knox, Ky.– Engaging an enemy in live fire combat is not in normal human nature. However, in the Army it is not only expected but becomes second nature.

Getting to that point takes training—and lots of it.

The Buddy Team Live Fire training exercise has Cadets go through with a partner and practice maneuvering down range towards an enemy bunker. Partners take turns shooting to cover the other participant advancing down the range. This exercise requires constant communication between partners and strategic planning ahead of time.

Monday, May 20, Cadre members were out at the range setting up the lanes before Cadets arrive. 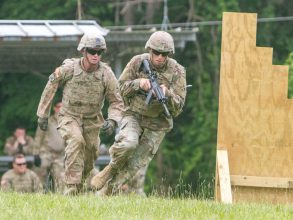 Lanes consist of different barricades which act as markers for the participants next move. The first is a stairstep shaped wooden barricade which acts as a stabilizer for the Cadets while they shoot. The next barricades are log barricades the Cadet can hide behind while shooting from either side. After going through a couple log barricades, Cadets reach the bunker which is cleared after throwing a practice grenade.

Going through this exercise Cadets are going to learn to shoot, move and communicate as well as building confidence in themselves, their peers and with their weapon.

“Depending on what they choose for their branch, or job in the military, if they want to go infantry this is a huge part of our job and how we become professionals at destroying the enemy.” Sgt. Andrew Kortbawi, from Castlerock, Colorado said.

Kortbawi is one of the Cadre members leading this training exercise. Now leading the exercise he had previously gone through, Kortbawi gained a new perspective.

“When you go through it as a private, you do not know much and you can’t see much beside what you can see through your own perspective but when you see it on the outside it becomes more evident why this exercise needs to be done.” Kortbawi said.

Kortbawi is not alone in his new-found appreciation for the training and its goals. Sgt. Joseph Sanchez, from Hesperia, California, said he learned a lot about the importance of the event. 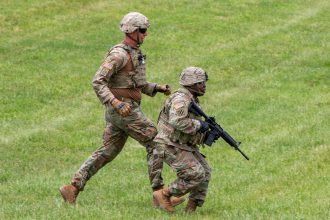 Sgt. Clay Adams and Sgt. Dakota Siemering conducts a dry run of the Buddy Team Live Fire on May 22 at Fort Knox KY. This is the first time Buddy Team Live Fire will be conducted at Cadet Summer Training, so the Range Cadre are preparing for the Cadets as thouroughly as possible before they arrive. | Photo by Kyle Gallagher, CST Public Affairs Office.

“Walking with others you start to see how actually dangerous it is and I can see that it is a whole lot more than two dudes just running down the range shooting.” Sanchez said.

While professionalism is important in and during the event, several Soldiers just think that the training can be fun too.

“Running and shooting guns is the best part of the job in the military.” Sanchez said.

It’s All In Your Head

Cadre are Right on Target