FORT KNOX, Ky. — The Confidence Course is just one of the many different events Cadets will face during Cadet Summer Training, but this event focuses more inward than outward.

The course is made up of nine different events that challenge Cadets physically, mentally, and emotionally throughout each of them, and May 29, 2019, Cadets from 1st Regiment Charlie and Delta companies had a chance to overcome each one. 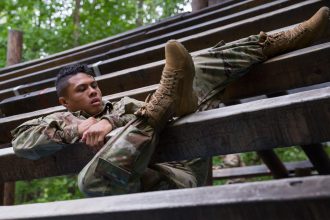 Cadet Tyrone Virgino, University of San Francisco, from Vallejo, Calif., attempts the ‘The Weaver’ obstacle, Fort Knox, Ky., May 29, 2019. This obstacle is known as the hardest out of the nine obstacles of the Confidence Course meant to challenge Cadets physically and Virgino completed it. | Photo by Kyle Crawford, CST Public Affairs Office

One of these events known as ‘The Weaver’ challenges Cadets to move themselves over and under boards without ever touching the mat below. And for many of the Cadets this was one of the most challenging obstacles on the course.

Cadet Craig Morgan of Fishers, Indiana, who came to Fort Knox, Kentucky, from Purdue University said ‘The Weaver’ had been the hardest obstacle he had done so far.

When asked if he had any tips for future Cadets, he said, “I would say just stay focused and have a lot of fun. Because it is. It is a lot of fun. Requires a lot of hand and eye coordination. Moving different parts of your body in different ways. It is pretty discombobulating.”

“Its mind over matter,” Jobe said. “Your body can go a lot further than you think it can. So, these obstacle courses, looking at them, you just need to think that I can do this. And as long as you have the mental attitude to get to over it you will be able to physically do it.”

Although, sometimes, it isn’t just mentally knowing where to put your body but being able to step up to the challenge in front of you when tackling each obstacle on the course.

Orlando, Florida, native Cadet Mario Vargas from the University of Central Florida said it wasn’t ‘The Weaver’ that was the hardest but the Confidence Tower, which is a 64-foot tower that Cadets must rappel off, was. “Because I hate heights,” Vargas said.

However, Vargas wanted to tell future Cadets, “It may suck, but everyone is here with a fantastic attitude. We recognize we are all in this together and we are just trying to support each other.”

“Rely on each other,” Vargas added. “If everyone comes with the same mindset, you’ll support each other. As well as the Cadre here are fantastic. They’re world class. So they’ll lead you in the right way, and they’ll hopefully set the stage to mold you into good second lieutenants.”

Staff Sgt. Lonnie Bickford was one of the Cadre who was overseeing one of the obstacles, the Confidence Climb specifically. As a part of 3-414th, Task Force Wolf, who train all kinds of Soldiers, Bickford said that he was no stranger to training lieutenants.

“These tests test trust you have in yourself,” Bickford said, “It’s called a confidence course for a reason. You can never fail if you don’t give up.”

While all may not have passed every obstacle the first time, it was clear none of their spirits had been broken. 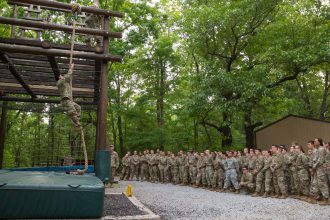 Cadets from 1st Regiment Advance Camp, Charlie Company, watch a demonstration by ROTC Cadre members on how to complete the ‘Tough One’ obstacle, Fort Knox, Ky., May 29, 2019. The ‘Tough One’ was the first obstacle the Cadets were briefed on. | Photo by Kyle Crawford, CST Public Affairs Office

Cadet Edward Valencia of Chandler, Arizona, said that the hardest obstacle for him was the ‘Tough One’, where the Cadets have to climb up a rope, walk over separated planks, and finally climb down a 30-foot cargo net.

The Arizona State University Cadet had gotten stuck on the rope when he got twisted around underneath the log the rope was attached to, and eventually had to let go and climb the ladder on the side rather than the rope. But this didn’t deter him in the least.

“It felt really good,” Valencia said. “I’ve done similar obstacle courses before, and I have struggled. But tackling them this time with pretty much all of them, except for the tough one, being able to get it on the first time was really motivating. I felt really accomplished.” 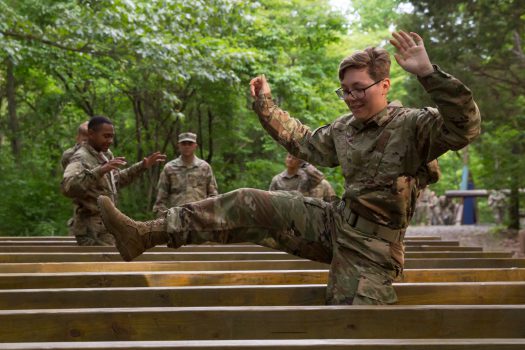 So Many Branches… A Cadet’s Career Choice