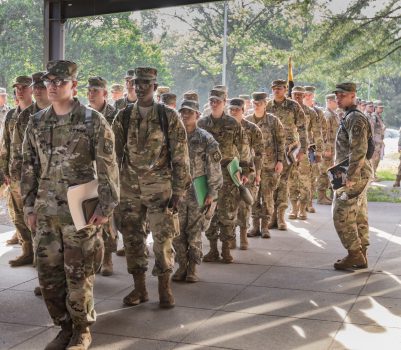 1st Regiment Advance Camp Cadets arrive at the Copple Center for Inprocessing at Fort Knox, May 24, 2019. | Photo by Jodi Moffett

Once inside the Copple Center, Cadets pass through seven different stations: including arrival at CST and CCIMS, listing special guests that might be coming to graduation, Cadet payment information and issues, verifying travel arrangements in Defense Travel System (DTS) after CST, confirming emergency data information, and a few other administrative stations.

“We double check to make sure all their pay information is included, their scholarship payments, and if there’s any issues, they will be handled at that time,” explained Ted Rodgers, a Human Resource Assistant from the University of Massachusetts.  Rodgers is here at Fort Knox working with the Regimental Assistance Team.

Cadet Ryan Schmitz from the Virginia Military Institute reviews his documents before he beings Inprocessing at Fort Knox, 24 May 2019. | Photo by Jodi Moffett

Because inprocessing can take some time to complete, many Cadets felt excitement and some nervousness while waiting their turn to officially start CST.  Cadet James Harding from the University of Massachusetts is excited to further his knowledge and gain more experiences.  “I want to hone in on my land navigation skills because I think it’d be really great to know where I am at all times in missions and know personal navigation,” said Harding.

Cadet Nicholas Rice from Marion Military Institute in Alabama expressed his one concern heading into CST shortly before he began inprocessing.  “I’m most nervous about the gas chamber because I haven’t done it in a while…it’s been four years since I’ve been to basic training,” shared Rice.

But Rice was not the only Cadet with this fear.  Many other Cadets agreed that they were quite anxious for their CBRN defense training, including Cadet Aldhair Merino.  An ROTC student at the City University College of New York, Merino went to basic camp last year and is grateful that he has prior knowledge leading into Advanced Camp.  Although only on day one, Merino offered advice to Cadets still to come to Advanced Camp saying, “Keep a positive mind.  Study a lot on land navigation. If you can, go to the shooting range.  Read on leadership, tactics and everything that’s specific to advanced camp.  Be confident, it’s alright if you make mistakes, that’s going to happen.  That’s why we’re here, to learn.”

Eager Cadre stood around the Cadets, excited to get training started.  Capt. Calvin Ladson, a Platoon Training Officer, is looking forward to making sure his thirty-nine Cadets get all the basic fundamental skills needed at summer training.  He advises incoming Cadets, “Be mentally resilient as much as possible.  Come here ready to go, determined, and committed. Be ready to have some fun and build the skills you developed back home.”

Master Sgt. Stephen Graham, a Senior Military Instructor from the University of Memphis, watched over the Cadets as they waited their turn to in-process.  Graham, a Platoon Observer Controller Trainer (OCT), talked about what he expects from the Cadets during their time at Fort Knox, saying “I expect to see a lot of individual growth in the Cadets and hope they learn a lot about themselves.  Some may think that they are really top notch and maybe they aren’t, and some who don’t think they’re top notch, really are.” 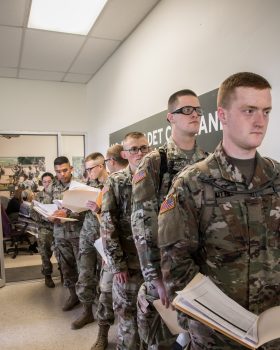 1st Regiment Advance Camp Cadets in line to begin their Inprocessing at the Copple Center at Fort Knox, May 24, 2019. | Photo by Jodi Moffett

I Swear, I See Them In The Trees