Fort Knox, Ky. – Cadets may have taken the stairs up the 60- foot tower, but that is not how they came down.

At 7 a.m. Cadets arrived to the rappel tower site and were given their safety brief.

Cadet Kate Hanlon from the University of Texas-Austin learns how to tie a swiss seat before completing the Rappel training for Advanced Camp on May 29, 2019, at Fort Knox, Kentucky. | Photo by Reagan Zimmerman, CST Public Affairs Office

rope. Once the harnesses were secured and inspected, Cadets hit the tower.

Cadets went through three different rappels. The first rappel was down a small slanted wall in which they were given a chance to learn and practice the proper procedures before repelling down the 60-foot tower. Then the Cadets rappelled down the 60-foot tower on the wall side, where they bounded and braked using the wall as stabilization. The last rappel the Cadets went down was a free fall rappel without a wall.

For some Cadets like Jacob Burton, from Brookings, South Dakota, attending South Dakota University, rappelling is nothing new.

“It is awesome,” Burton said. “I have been to air assault school and I love all this.”

After completing the different rappels, Burton said he enjoyed the adrenaline rush.

“It has been two years since, I have done it, so it is exciting to do it again,” Burton said. “There is just some adrenaline going so your heart is racing and it is fun to free fall a little bit.”

For other Cadets, this was a completely new experience. This is the case for Cadet Logan Locke, from Starkville Mississippi, attending Mississippi State University.

Locke said that he avoided looking at the ground before his turn on the tower.

“I was thinking ‘don’t look down,’” Locke said. “I was excited to finally do it for the first time because it is something I have always wanted to do. Once you get on it, the fear gets out of your body, so it is actually pretty cool when you are on the wall.” 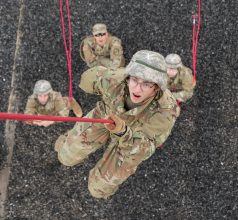 Cadet Jacob Pearl from the University of Missouri rappels off the side of Torres Tower to complete the Rappel training for Advanced Camp on May 29, 2019, at Fort Knox, Kentucky. | Photo by Reagan Zimmerman, CST Public Affairs Office

The wall provided a sense of comfort for the Cadet, so the free fall rappel invited new fears.

“That one was a little more nerve wracking for me because I didn’t have my feet on anything, so I was just swinging back and forth, but it was still pretty fun as well,” Locke said.

Upon completion of the rappel course, Locke had a new sense of confidence.

“I feel really good, it’s something I really want to do again, and I am definitely glad I got the opportunity to do it today,” Locke said.

Sgt. 1st Class Justin Davis, from Glasgow, Kentucky, said building confidence is one of the reasons Cadets go through the rappel course.

“It helps to build confidence and demonstrate the word ethos. It also demonstrates the Army attributes and competencies,” Davis said. 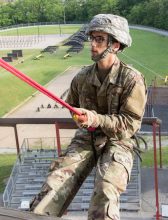 A Cadet from 1st Regiment, Advanced Camp, C Company, prepares to rappel down the wall of Torres Tower during the Rappel training on May 29, 2019, at Fort Knox, Kentucky. | Photo by Reagan Zimmerman, CST Public Affairs Office

“My favorite part of working with Cadets is just knowing that they are future leaders and no matter how far they go, I got to play a small part in their development,” Davis said.

Focus on the Target