[embedyt] https://www.youtube.com/watch?v=yljztc__YQ4[/embedyt]Fort Knox, Ky. – Around 9 p.m. Tuesday, the 1st Regiment at Advanced Camp patiently waited for the sun to set before beginning their Night Land Navigation test.  Cadets had two hours to find at least one point, unassisted, on a course on the outer edge of Fort Knox. 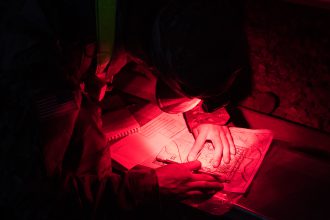 1st Regiment Advanced Camp Cadets are given a map, protractor and compass to navigate thier way through the darkness. Cadets are allowed to use a red light to look at their map, but can only navigate by the moon’s light when moving to their points at Fort Knox, May 29, 2019. | Photo by Jodi Moffett, CST Public Affairs Office

“Land nav is the essential function of leading Soldiers, especially soldiering skills like infantry.  It’s the basic building block to finding your way, knowing where to go, where you are, and knowing where to go after that,” explained Cadet John Just, an Organizational Leadership and Human Resource major at Ball State University.

Cadets were given a map, compass, protractor, and grid coordinates. Their mission was to use the information and tools to mark the points on the map, and find their way to each plotted point in the terrain. 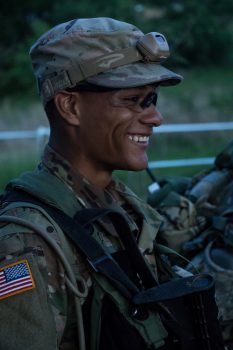 Cadet Daniel Cole, from the University of Hawaii at Manoa, shares a light moment before he begins his night land navigation with fellow 1st Regiment Advanced Camp cadets at Fort Knox, May 28, 2019. | Photo by Jodi Moffett, CST Public Affairs Office

Shuing (Kevin) Dong, a Health Services Management major at the University of Minnesota, explained two different tactics a Cadet could use to find their points.

“You can terrain associate and pretty much walk right up to a point.  If you’re not that gifted then you can do tactical points, where you find a known location like a water station that has its coordinates marked and from there you shoot an azimuth, and walk a straight line to the point,” said Dong, a Faribault, Minnesota native.

Some Cadets navigated the area and found their points more efficiently than others because of their prior enlistment experience or their school’s ROTC requirements.

When asked how the mission went, Eli Eaton, a Cadet from Morehead State University, was confident in his completion of the training. Eaton was familiar with the area because he not only attended Basic Camp at Fort Knox two years ago, but also was given the opportunity to train on this specific course with his ROTC program.

“I think it went pretty well. My points were fairly close through some thick vegetation, but it wasn’t too bad of a hike…Some people seemed to have a hard time, especially if they’re not from Kentucky,” said Eaton.

Daniel Cole, 25, served five years in the Army before attending college.  He too has a good amount of knowledge pertaining to land navigation after being stationed in Korea, Fort Riley, Joint Base Lewis-McChord, and many others bases in the United States.  Though experienced, Cole has struggled to adapt to Advanced Camp. 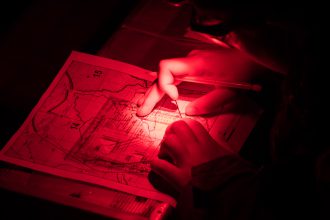 1st Regiment Advanced Camp Cadets are given a map, protractor and compass to navigate thier way through the darkness. Cadets are allowed to use a red light to look at their map, but can only navigate by the moon’s light when moving to their points at Fort Knox, May 29, 2019. | Photo by Jodi Moffett, CST Public Affairs Office

“Honestly, when I first got here, I really had to get my mind in the right mind frame because it felt like basic training all over again. I started thinking, why do I have to do this? Then I thought back as to why I originally joined the program and what my goals where…that’s what’s helping me get through this now and my overall future goals,” explained Cole.

Another prior service Cadet is Dominic Bennett from Carlton, Minnesota. Serving is a family tradition for Bennett.  His grandfather, father, and brother all served, or are serving, the latter two as officers. Influenced by his family, Bennett decided to go back to school at the University of Wisconsin-Stout and become an Army Officer.

1st Regiment completed a land navigation mission earlier that morning requiring Cadets to find four points in four hours.  When asked what the difference between the two missions were, Bennett explained, “The difference I would say between finding two points at night in two hours and four points in the light is honestly just the light.  One big thing tonight is that there’s no moon.  Believe it or not, the moon helps light up those woods.  Daytime land nav is way easier than night.”

Many Cadets, such as Eaton and Bennett, finished well before the two hours were completed and were relieved that they had passed.