RIPON, Wis. — Eighteen Cadets from the Fox Valley Battalion commissioned as Officers in the U.S. Army to begin their military careers May 24 at Ripon College.

According to the University of Wisconsin-Oshkosh Professor of Military Science Lt. Col. Keven Beattie, a commissioning ceremony is when a Cadet takes the oath of office and becomes a commissioned second lieutenant in the U.S. Army.

The ceremony included a tribute to 100 years of ROTC at Ripon College and three key individual gestures from each commissioning Cadet. Those included, the oath of office, either Federal or National Guard, the pinning of the second lieutenant shoulder boards, signifying their new rank and the “Silver Dollar Salute.” 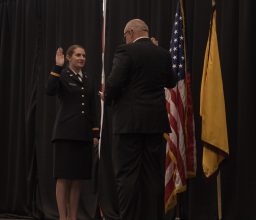 Cadet Aubreigh LaFleur receives the Federal Oath of Office from her father, retired Lt. Col. Dan Zimmerman, during the Class of 2019 Commissioning Ceremony for the Fox Valley Battalion on May 24, 2019, at Ripon College. | Photo by Reagan Zimmerman, CST Public Affairs Office

Among the 18 newly commissioned Officers were Aubreigh and Justin Lafleur. The newly married couple were able to commission together, with Aubreigh branching as a Signal Officer and Justin, an Armor Officer.

Their relationship actually started because of ROTC.

“So this goon showed up to PT on the first day with a baseball cap [and] long hair,” Aubreigh said, explaining their first meeting.

After that day, the two struck up a strong friendship and eventually became best friends, as cheesy as it sounds.

Both are thankful for the ROTC program because it not only brought them each other, but it brought them challenges and new found characteristics.

“It challenged me and I enjoyed that. I never had that before,” Aubreigh said. “It challenged who I was… It made me into a better leader.” 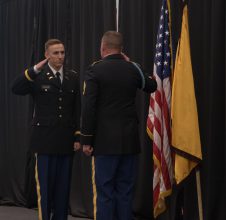 For Justin, ROTC gave him the mindset he has today. Through physical and mental challenges like Norwegian Foot March, and through the leadership of the Cadre at Ripon College, he was pushed to be the best version of himself.

“I think I am 100 times more disciplined than I was coming into college,” Justin said.

Aubreigh agreed with Justin but also said it helped keep herself in check.

“ROTC has helped hold [myself] to a higher standard than I had before,” Aubreigh said. “I expect more out of myself because I know that I can do more than I could before.”

They also had to learn how to hold each other accountable with keeping their personal relationship out of ROTC.

“Having a relationship in ROTC is hard,” Justin said. “It is your profession, your job and you can’t let the two overlap.”

Now that their time in ROTC is over, they are looking onto the future.

Aubreigh and Justin are set to travel to Fort Knox, Kentucky, this summer to help with Cadet Summer Training (CST). After Fort Knox, they will head to Georgia to attend their respective Basic Officer Leader Course (BOLC). 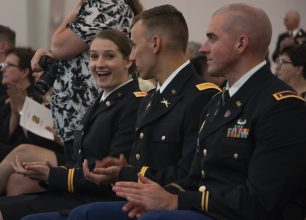 2nd Lt. Aubreigh LaFleur shows her excitement of becoming an Officer in the U.S. Army alongside her husband, 2nd Lt. Justin LaFleur, and fellow 2nd Lt., Brandon Lohrentz, during the Class of 2019 Commissioning Ceremony for the Fox Valley Battalion on May 24, 2019, at Ripon College. | Photo by Reagan Zimmerman, CST Public Affairs Office

The two hope to be stationed together at Fort Hood, Texas, upon completing BOLC.

“I am excited because it is starting a whole new chapter,” Aubreigh said. “I am excited for the adventures and to just do a bunch of new stuff.”

When You Can’t Rely on Technology