FORT KNOX, Ky. — Preliminary Marksmanship Instruction (PMI) is just the beginning of the cornerstone skill for every Soldier in the United States Army, rifle marksmanship.

Sgt. 1st Class Aaron Kirkendall, a military science and ROTC instructor at West Virginia State University but a cavalry scout by trade, gave a brief overview of what PMI included. 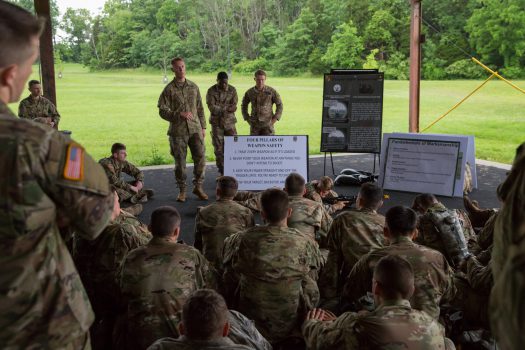 Cadets from Alpha Co., 1st Regiment Advanced Camp, listen to a lecture on positioning, Fort Knox, Ky., May 30, 2019. Soldiers from the 4th Infantry Division taught the fundamentals of marksmanship to the Cadets. | Photo by Kyle Crawford, CST Public Affairs Office

All Cadets would leave the training today being able to use weapon systems, disassemble and reassemble them, as well as how to maintain rifles they use. This training also included weapon safety, and the fundamentals of marksmanship, where the Cadets zeroed their rifles, so they would be ready for the rifle ranges the following day and beyond. 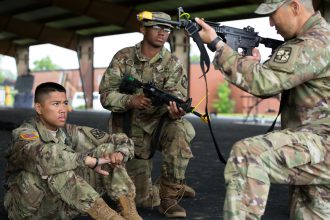 “As a leader you need to know how to perform the tasks you are expecting yourself,” Kirkendall said. “Everyone in the Army is a rifleman first and then their follow-on job or position, second. That’s why you learn basic marksmanship and shooting in basic training before you actually learn your trade skill. So this is one of the very basic fundamentals of being a Soldier.”

So, no matter the skill level of the Cadets when it comes to using a rifle, everyone was able to find something useful in this training.

Cadet Joshua Erney, from Bethlehem, Pennsylvania, noted that he had been to the range before and was used to firing a rifle, but that didn’t mean the training wasn’t useful.

“We are always rotating leadership positions so the fact that I already know this means I pay attention to make sure I haven’t missed anything,” the Cadet from The Citadel said. “Also, since I am currently rotated into a leadership role I’m making sure that the guys who don’t know all of this stuff are paying extra attention or asking for that extra assistance from the guys who are a little more confident.”

Helping those who were unfamiliar to the weapons or reinforcing what they already knew were things that many of the Cadets found the training really excelled at. 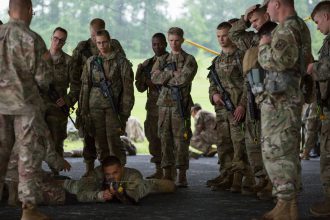 Cadet Peter Rhodes of Haddonfield, New Jersey, from Virginia Tech was another Cadet who was used to the range and rifles thanks to work he had done back at his university.

“On both ends [helping other cadets or learned anything new from cadets] yes,” Rhodes said. “We have some people here in my platoon that are on marksmanship teams, so we have some pretty squared away guys that know exactly what they are doing when it comes to precision. We have some people who have never touched a rifle before, and the good thing is that having that mix of people you find a nice middle ground so it has been great.”

And for some like Cadet Kailey Owen, hailing from Ozark, Alabama, who has done some range work but not extensively, she found that the training helped her with, “Learning different things. Things that make you a better shooter and the basic fundamentals of shooting from the people here because they have been able to help me understand where I am lacking.”

Owen, a Cadet from the Marion Military Institute, also found help from her fellow Cadets, “I picked up how to put the sling and lock my arm in the sling so that I get a better grip against the recoil so it doesn’t mess up my shot from Cadet Henry [Alpha Company, 1st Regiment].”

For others who were familiar with the rifles and range, the reinforcement of the basics can help touch up on skills one may be rusty on or open their eyes to something new. 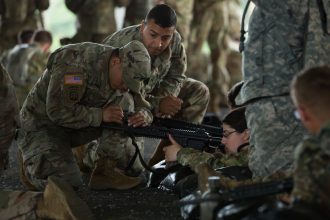 Cadet Alexandria Hager from Marlette, Michigan, has done range work at her university, Michigan State University, but found that there was always more to learn.

“Getting some more practice always helps,” Hager said. “It has been a while since I have shot. I’m on my program’s marksmanship team, so I do shoot a lot during the school year. But I haven’t since school ended so this is really exciting. And to pick up different tips and perspectives from different people. I already got a new tip on pistol grip hand hold.”

Cadet Matthew Havel from the University of Florida found the trainers also helped bring new perspective to the way they were shooting.

“We have gotten instruction from top of the line marksmen in the Army which I think is cool,” Havel, an Orlando, Florida native, said. “I haven’t had that experience before, so I that’s going to be high quality lessons we are getting from them.”