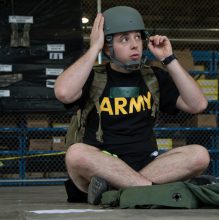 McDaniel College student, Cadet Andre Berry from 2nd Regt. Bravo Co., tries on his helmet to see if it is the right size on Thursday, May 30, 2019, at Fort Knox, KY. Cadets from each regiment will go to CIF to get any supplies that they still need after they arrive. | Photo by Makayla Holder, CST Public Affairs Office

Cadets from 2nd Regiment Advanced Camp received the final pieces of their clothing and equipment list today at the Central Issue Facility at Fort Knox, Kentucky.

Some supplies they may need are socks, leather gloves, a ruck sack or a poncho.

The Cadets lined up and moved from station-to-station drawing any missing items.   Then, they checked the supplies to be sure it is the correct size and serviceable, free of holes, rips, or damages.

Cadets are only allowed to have supplies which are issued and regulated by the Army. There are many items that are considered to be contraband, or not allowed.

Some Cadets said they will miss having their phones during Advanced Camp. They won’t be able to check on family and friends during certain periods because a phone can be considered contraband. 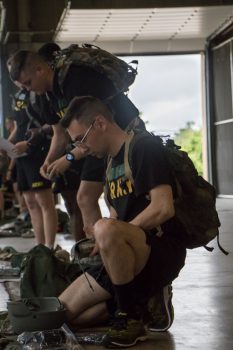 Cadet Jameson Nevitt from 2nd Regt. Bravo Co., unpacks his bag on Thursday, May 30, 2019, at Fort Knox, KY. Cadets from each regiment will go to CIF to get any supplies that they still need after they arrive. | Photo by Makayla Holder, CST Public Affairs Office

Even without the luxuries of regular civilian life, these Cadets are excited for Advanced Camp. Elijah Baldwin, from Los Angeles, California, said he’s ready to make friendships with his fellow Cadets.

There are 37 days of Advanced Camp with a combination in garrison assessment and field training exercises (FTX). Many Cadets said they’ll miss their family members during their time at Fort Knox.

“It’s our anniversary and my daughter’s birthday during the time I’m here,” Anthony said.

Now that the Cadets are fully equipped with Army gear, they will continue Cadet Summer Training. The supplies they received today will be used for several events throughout Advanced Camp.