Following a day of Preliminary Marksmanship Instruction, the Cadets moved to the range to fire their M4 Carbine at a target 25-meters away.  This is the first step in weapons qualification, a must pass event for camp graduation. 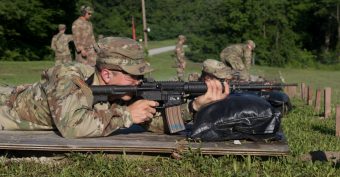 Cadet Ryan Fameli from the College of William & Mary, lets a shell casing fly while he practices his rifle marksmanship to prepare for the upcoming weapons qualification during Group and Zero training on May 31 at Fort Knox, Kentucky. | Photo by Reagan Zimmerman, CST Public Affairs Office

Today’s Group and Zero range trains Cadets to zero their weapon by grouping their shots as close together as possible. After receiving instruction from their Cadre, they took to the range to put yesterday’s and this morning’s knowledge to the test.

Every Cadet is issued an M4 upon arrival; using this weapon, they were given 30 rounds to zero their weapon. Should they fail on their first try, Cadets are sent to remedial training.

Remedial training gave the Cadets the extra training they need to go back to the firing line again and successfully zero their weapon.

“The Group and Zero is meant for the Cadets to build off their basic knowledge as far as the fundamentals,” Staff Sgt. Bradley Lorencz, a range instructor, said. “Being able to acquire the target at a 25 meter zero and engage targets up to 300 meters and have direct impact and effect on targets engaged.” 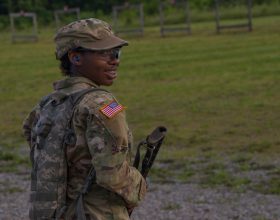 Cadet Griffin smiles over to her Cadre after they give her instruction at the Group and Zero. | Photo by Megan Reynolds, CST Public Affairs Office

Each Cadet comes to Advanced Camp with varying degrees of marksmanship abilities.   Some have never shot a gun in their life while others have grown up hunting with their parents or practicing at the range with their university.

“At this point and stage, some of them [the Cadets] are more intermediate, but the majority of them are still beginners in using military weapon systems, such as the M4,” Lorencz said.

Just because a Cadet may not have experience, though, doesn’t mean that they won’t have the same amount of success that a Cadet with experience has. 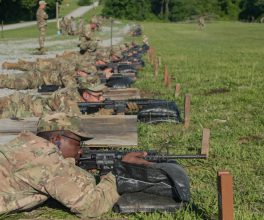 De St. Aubin shot for the first time two weeks ago when her university went to the range to prepare her for camp. Her university Cadre took the students to a pop-up target range, just as the cadets will face here at Ft. Knox when qualifying, de St. Aubin said.

As a nursing major, de St. Aubin has always heard that she isn’t the best shot. Nurses get teased for being bad shots quite often, she said.

“They kind of tease us a little bit because we never actually have to do this, so they make jokes that we’re not going to be able to shoot,” de St. Aubin said.

Cadet Daniel Cole, from the University of Hawaii at Manoa, has had quite a difference experience with military weapons systems, having served in the U.S. Army before returning to university and joining ROTC.

“I was enlisted in the Army for five years before this and I got promoted really quickly,” Cole said. “However, I did not like my MOS. I made E6 in four years and once you make E6, they’re not going to let you out of that MOS.” 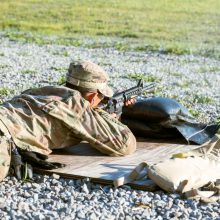 Cadet Yao Xu, from Stockon, California attending the University of California, Berkeley, fires his M4 carbine at the Canby Range, in Fort Knox, Ky., on May 31, 2019. This was the first day for Cadets from 1st Regiment Advanced Camp to fire live ammunition as part of their BRM, or Basic Rifle Marksmanship. | Photo by Kyle Gallagher, CST Public Affairs Office

Cole saw going to college and joining ROTC as a chance for him to change the course of his military career. It was a way to make a better life for himself, he says.

So, today’s range experience is nothing new to the former non-commissioned officer.

“I’ve grouped and zeroed before, and I’ll be honest, sometimes it takes a while,” Cole said. “It all depends on how your mindset is that day. It all depends on whether you can focus your mind enough on the target and not get discouraged.”

Cole sees the Group and Zero event as more of a mental task than a physical one. It’s about keeping confidence in yourself and your ability.

The Group and Zero is about having faith in your own ability to succeed.