Cadet Anna Michaels from the University of South Alabama expresses how she felt about the Map Reading Test at Fort Knox, KY on Saturday, June 1. She stated she felt well prepared for the test based off what she has previously learned from her university. | Photo by Hannah Hedden, Public Affairs for CST

During their ROTC years at their schools Cadets receive the tools and skills to read a map. The Map Reading Test is a pass or fail event for Cadets and important to understand before they actively find points during Day and Night Land Navigation.

Out of the 156 Cadets in Alpha Company, only 14 percent were no-go’s and must retake the exam. Within the 86 percent that were first time go’s, 30 percent made Recondo, meaning they got all of the questions correct.

“I felt confident going into it because my school does focus a lot on Land Nav. So pretty confident but also pretty nervous because this is kind of a pass or fail event,” said Anna Michaels of University of South Alabama. “We take a lot of practice test at our school, so I felt pretty prepared and the test was sort of like what we take at school.”

Michaels had the opportunity to proactively learn about grids and plotting points while going to land navigations courses in Alabama near her university. The more practice she had, the more it boosted her confidence.

Cadets that had the opportunity to practice on land navigations courses seemed to be more confident in their abilities that they had while taken the test.

“I think I was pretty prepared. I’ve done a test like that a couple times at my university. We’ve could’ve done more work on it, but it’s more of you going the extra mile to study yourself [also],” shared Kalim Williams Lawrence of the University of Virgin Islands. 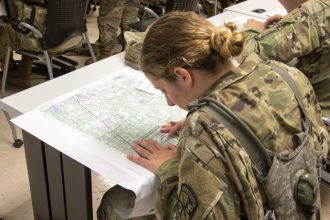 But practice or not, sometimes an educated guess is in order.

“[I was most nervous about] the terrain features. It was a little more confusing than what it should’ve been but it’s one or the other, you gotta pick one,” said Jonnierah Smith of Ohio University.

According to 2ndLt. Jessica Long, who graded today’s exam, terrain feature identification were common questions missed for those who needed to retest.

Smith and Williams Lawrence both suggested that coming for Fort Knox should prepare themselves. Especially, focusing on terrain features.

How to make your Mark: Pre-Marksmanship Training