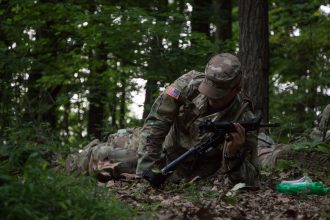 This “practice” patrol base operation prepares the Cadets for the three-phase field training exercise toward the end of Advanced Camp.

Capt. Winston Simmonds, the training officer for the 2nd Platoon, explained the reason for this exercise.

“Basically, it’s a stationary position for where they can continue mission prep, they can plan other missions or they can also take the opportunity to refit, work on weapons maintenance,” Simmonds said. “If need be, or depending on the permissive nature of the environment, afford the platoon some time to refresh and recover prior to stepping off and getting after some more missions.”

The patrol base acts as a simulation of an actual mission during deployment. The Cadets must act as though there are potential enemies around their area. They must stay silent, with their guns pointed into the woods surrounding them.

The squad leaders gathered in the center and discussed the events of that day. They also prepared for the next mission together, briefing each other on any important news. 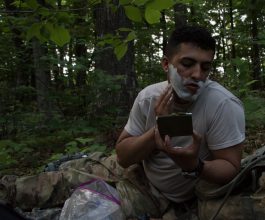 As some Cadets kept watch, others used that time to prepare for the night by cleaning their weapon or eating an MRE. Cadets also used that time for hygiene by shaving, brushing their teeth and using wipes to clean off the day’s sweat and grime.

Another important part of this exercise is to learn how to set up a bivouac site, or temporary sleeping area. The beds are made with whatever supplies the Cadets carry with them in their ruck sack. Joseph Seabrook, a Georgia Military College student, explained how he makes his “5-star hotel bed” in the woods.

“First, you start with a poncho to keep the moisture of the ground from coming up underneath you,” he said. “Then you set down your bed mat to act as sort of a mattress. It may not be a twin size, queen or king, but it gets the job done.”

Seabrook also used something called a bivy cover for his bed, which he said is to protect from the dew in the mornings. He put a sleeping bag inside his bivy cover for warmth. Finally, he used a woobie, or Army blanket, as a pillow to keep his “dreams warm at night.” 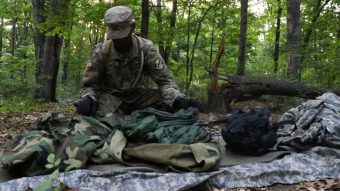 Cadets must sleep in the woods, with limited supplies to protect themselves from the environment. Many of them sprayed bug spray around their sleeping areas and wore a balaclava, or face mask, to keep bugs from crawling in their nose, mouth or ears.

Despite these conditions, Seabrook said it doesn’t affect his sleep.

“I think the best thing out in the field is you have your own night light,” he said. “You look up and see the stars and can’t help but drift off into probably the most peaceful slumber anyone can ever think of.”

When the Cadets of 1st Regiment participate in field training exercises later this summer, they will have to stay in their bivouac sites for much longer than two nights. This exercise has prepared them for what they might face while spending several days in the woods of Fort Knox, Kentucky.

Over the river, through the woods…