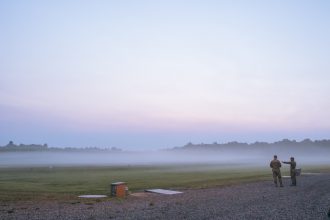 Weapons training is done at a pop-up course, new this summer to Advanced Camp. Previously, Advanced Camp has been 31 days long, focusing the marksmanship training on a paper course. The paper course focuses the shooting at paper targets that are constant and unmoving.

Now, Advanced Camp is 37 days long, specifically to work more on the Cadets’ marksmanship ability. This has brought the addition of a pop-up course, in which the targets will pop up across the range in various distances, requiring the Cadets to adjust their aim with each target. 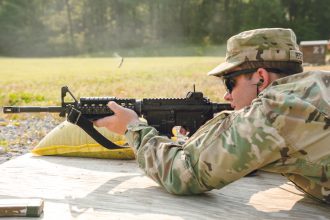 Cadet Justin Peterson, from Aurora, Illinois, attending Aurora University, fires his M4 rifle at the George Blair Range in Fort Knox, Ky., on June 1, 2019. Cadets from 1st Regiment are in the middle of their BRM, or Basic Rifle Marksmanship training during Advanced Camp, and tomorrow they will qualify on their M4 Carbines. | Photo by Kyle Gallagher, CST Public Affairs Office

“Specifically, this range gives them what’s called ‘down-range feedback,’” Master Sgt. Don Oakes, Senior Military Instructor at North Carolina A&T University and the Non-Commissioned Officer in Charge of Basic Rifle Marksmanship for all of Cadet Summer Training, said. “So, they’ve zeroed and grouped at 25 meters, and now they’re shooting at 50, 100 and 300 meters.”

The difference between a prone supported and prone unsupported is that the support allows the Cadet to rest their arms and weapon on sandbags, rather than purely on their elbows.

“This takes them out to the longest they’ll shoot on the qualification range, which is 300 meters,” Oakes said. 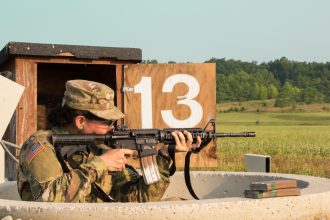 Qualifying is a must-pass event; Cadets must hit 23 out of 40 targets in order to qualify. That’s where the necessity of this training comes in. If a Cadet does not qualify, they receive additional training before attempting to qualify again.

“It took me a while to zero, but with the Cadre out here, the lieutenants that have been teaching us, I feel like I’m a better shot now than I was before I entered,” Cadet Matthew Arreola, from Monterey, California, attending San Diego State University, said.

This has been Arreola’s third time shooting on a pop-up range, so his experience is not as extensive as he’d like it to be.

Not every Cadet goes through that sort of worry, however. 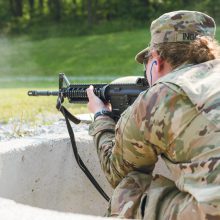 Cadet Sarah Ingraham, from Shoreview, Minnesota, attending Norwich University, fires her M4 rifle at the George Blair Range in Fort Knox, Ky., on June 1, 2019. Cadets from 1st Regiment are in the middle of their BRM, or Basic Rifle Marksmanship training during Advanced Camp, and tomorrow they will qualify on their M4 Carbines. | Photo by Kyle Gallagher, CST Public Affairs Office

Not only does Martinez think he’ll qualify, but he believes he’ll qualify with RECONDO standards. This means he’ll have to shoot 30 out of 40 on his first try, making him a “Sharpshooter,” as the military calls it.

“I shoot a lot,” Martinez said. “We’re near [Army] Mountain Warfare School and they have a pop-up range there, so I’m familiar with it.”

Oakes says confidence is certainly beneficial in qualifying for Basic Rifle Marksmanship, but remembering to be slow and deliberate in your actions will be the most helpful thing.

Sweaty and sticky – female hygiene in the field