Cadets from First Regiment took part in the WPN Qualification at George Blair Range to test their marksmanship capabilities.

Marta explained that if they don’t hit 23 out of the 40 targets, the Cadets will be sent to a retrain tent. “They will be trained by two AMU, the Army Marksmanship Unit, certified NCO’s,” he said. 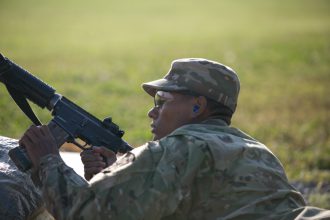 Cadet Michael Lugowsai attends Slippery Rock University, and is fromPittsburgh,Pennsylvania, said, “There’s three different scoring brackets. Marksman is 23 to 30, Sharpshooter 30 to 35, then there’s expert, 36 to 40. But 40 out of 40 is considered hawk-eye.”

Lugowsai said he isn’t just trying to pass, “I plan on shooting expert or Sharpshooter.” Other Cadets appeared confident as well in both their training and preparation.

Cadet Persia Tillman, a member of Columbus State University’s ROTC program, from Cuthbert, Georgia, said that she is confident in herself and her abilities. However, that doesn’t stop her nerves. “It’s ok to be nervous, I always go in nervous. I just don’t let my nerves over take me,” she insured.

Once the event is completed, the Cadets receive their scores and find out if they have qualified or not. 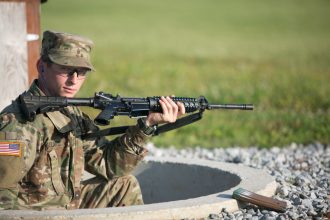 Cadet Nicholas Diflorio attends The University of New Haven, and is from Rochester, said that he shot a 26 out of 40. “During the prone supportive position, I didn’t do so well, because I was shooting high. From there I made an adjustment, and during the prone unsupported and the kneeling, I did really well and ended up qualifying.”

Cadet Justin Cavallard attends Gannon University, who grew up in Gibsonia Pennsylvania spoke immediately after shooting. “I think I did pretty well. This isn’t really new to me, I’ve done this qualification range before. The targets were a little different, but all in all I thought I shot about the same, maybe a little better under the pressure.”

The Cadets were firing on all cylinders this morning, all eager and focused on qualifying and marking off another box towards graduation.

TOC: Prepared for Any and All Situations