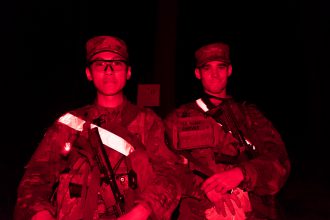 Cadets were given a map with two points that they were to find. Points are marked with orange and white, reflective signs posted on a stake.

Along with the map, Cadets are given a compass and a protractor to aid them in finding their way. Cadets may also use a red-light head lamp if they wish to help guide their way in the night.

“They have cards with a spot for a grid,” Sgt. Jonathan Solomon, a Cadre member from 361 Charlie Troop in Fort Carson, said. “All the stakes [points to reach] in here have a puncture hole and a number to correspond. So, what they need to do write down the right number and puncture hole that corresponds with the grid.” 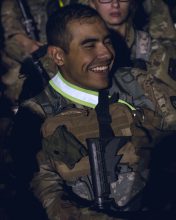 Some of the points these Cadets are finding have been set for years, used for generations of trainees, Solomon said. Every summer, the Cadre go through the land navigation course to ensure those points are still visible; time may weather away the stakes and many fall over and deteriorate.

The course used is a forested area, various pathways weaving their way throughout. Some of the points are located right on the sides of the paths; others, however, are found deep in the woods, and one is even on the other side of a swampy area. 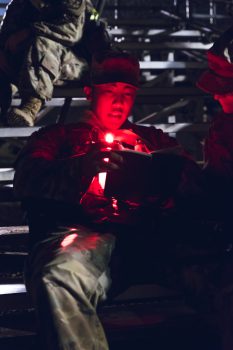 “You know where they’re at based on the roads, and knowing the road that you’re near, I think it helps,” Von Reiser said.

Von Reiser found both of his points in 46 minutes of the two hours given. He says that getting really acquainted with your terrain is one of the most beneficial things you can do in land navigation.

“Get really good with terrain association because that’s all this is,” Von Reiser said.

“I passed,” Smith said, some laughter tacked on. “I found that one point. It was one of the road ones, the other one was deep in the woods, about a click away.”

Smith passed her land navigation test in 45 minutes out of the two hours given. Day navigation was easier than night navigation, she said. She combatted the extra difficulty by being very conscious of what she was doing and paying attention to the task at hand. 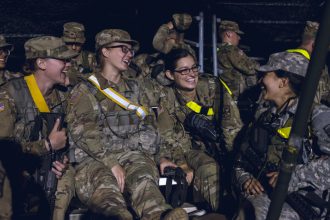 “You have to trust that pace-count and trust in your ability to find your point,” Smith said.

Above all, land navigation, both night and day, is about focus. The little details are what will drag your whole mission down, but focus on that pace count, on your compass, and success won’t be too far away.