FORT KNOX, Ky. – Cadets from the 2nd Regiment Advanced Camp overcame their insecurities and became more self-assured at the Rappel Tower and Confidence Course today.  In order to complete their training at Fort Knox, Cadets must complete these two events.

While Company C began learning how to tie a Swiss seat harness for the Rappel Tower, Company D began its day at the Confidence Course.  Through each of the nine obstacles on the Confidence Course, Cadets tested not only their mental endurance, but also used their upper-body and core strength. 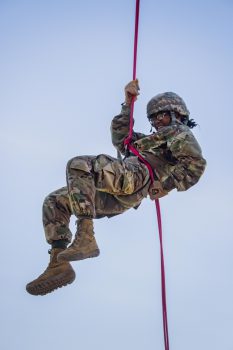 Some obstacles included The Weaver, where one has to maneuver his or her body over and under slanted logs, the Swing Stop and Jump, where Cadets use a rope to swing onto a raised beam and then jump off, and The Tough One, which encompasses multiple steps.  At The Tough One, Cadets must climb a rope, walk across wooden beams to a slanted ladder, and then climb up and over the ladder to a 30 ft. rope wall.

Cadet Nykia Free from Mary Baldwin University, had never climbed a rope before and was understandably nervous for The Tough One.  “I tried to go up the rope two times.  I know I’m small and couldn’t do it, but I just wanted to try.  It’s a good confidence builder and then when you have your team around you cheering you on, it makes it an even better experience,” said Free, a political science major. 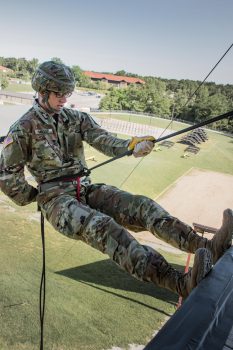 Cadet Paschal Miller, from the University of Texas at Austin, locks his knees and lowers himself into position before rappelling down the open end of the rappel tower at Fort Knox, June 3, 2019. | Photo by Jodi Moffett, CST Public Affairs Office

Cadet Zachary Kilgore, an information technology student at the University of Toledo, wasn’t nervous for any of the Confidence Courses except The Tough One.  “I’ve done all of these before at basic training and some of the other events I’ve done in my Army career.  This one [The Tough One] is more difficult. I always struggled with the arm rope climb, but I was able to complete it this time without any issue,” explained Kilgore.

Because some Cadets completed the Confidence Course before the Rappel Tower, they were able to gain a sense of self-assurance before attempting the 64 ft. Rappel Tower. “Going through those courses over there [Confidence Course], kind of helped with my fear of heights because they went up in height and were slanted. It really did build your confidence,” said Cadet Madalyn Palmer, an ROTC student at Washington University.

The Rappel Tower features one side with a wall the Cadets scale down and another that is open, where the Cadets free-fall between braking.  Cadet My Tran Ngyen, from the University of South Florida said she had some anxiety about the Rappel Tower. “Honestly, I didn’t think I would be that scared, but then I got up there and it got pretty bad.  But then the open end one was fun, I like that one a lot more,” said Ngyen, who was born in Vietnam.

Although some Cadets, such as Free and Palmer, do not plan on using techniques such as rappelling and maneuvering obstacles once they branch in Cyber and Medical, they believe that overall these events helped with team cohesion and building their confidence.

Cadet Joshua Kelsey, who has already been exposed to the Rappel Tower and the Confidence Course, believes these two events and the confidence they build, could benefit him throughout his military career. “I want to go infantry, so it’s important, obviously to lead from the front, and even when I am scared, I have to kind of suppress that and not let them see that. I have to set an example for others,” explained Kelsey, who attends the University of Central Oklahoma.

Through some tears and a lot of sweat, these Cadets were able to overcome some of their fears, become closer to their squad members and continue to build up their confidence here at Cadet Summer Training.

Standing Up A Little Straighter