Lt. Col. Perry Bolding spoke those words seconds before “Exercise, Exercise, Exercise,” was transmitted across the airwaves and into the U.S. Army Cadet Command Cadet Summer Training Tactical Operations Center starting an annual exercise to test the systems and processes to respond to a mass casualty event.

Today’s “game” centered around a vehicle accident involving a unit conducting a road march.  The injured included a broken leg, spinal injuries, and some with minor injuries.  The location of the crash and the severity of the injuries meant that multiple agencies needed to respond.

Immediately after receiving the radio alert, a Radio Telephone Operator called “Attention in the TOC,” and proceeded to relay the report.  The TOC is the heart of this exercise, as well as overseeing all CST operations, activities, and weather. 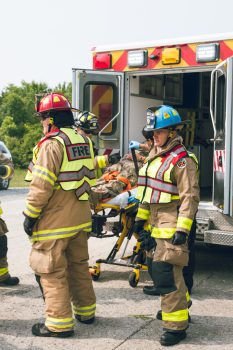 “This is really about a rehearsal, it is getting all the players that would be involved in a MEDEVAC exercise including the 911 operators, the MEDEVAC pilots, the medics on the ground providing aid on the scene as well as anyone that would be calling in a MEDEVAC like a committee chief or some kind of Cadre member,” Bolding said.

The TOC facilitates communications between everyone involved in and with Cadet Summer Training (CST) and outside agencies.  It is staffed 24-hours a day, seven days a week throughout CST.

“There are a bunch of moving pieces in the TOC, both the stuff going on externally and being reported in to here as well as our internal processes, how that information gets reported or recorded,” Capt. Evan Adams, Officer in Charge of the TOC, said.

For today’s Casualty Evacuation Exercise, the TOC oversaw communication between all the emergency response teams and people on the ground. Upon receiving the alert, a Soldier called the Military Police (MP) desk and sent notifications out to emergency personnel such as 911.

The team worked to keep track of the event’s progress which included timing the responses of emergency personnel as well as the event from start to finish. An Army MEDEVAC helicopter arrived on site within 18 minutes to transport the most “severely” injured to a hospital in Louisville. Within 41 minutes the entire training was over.

“My role was to ensure that we had proper communication and to ensure that proper information was being passed up to our higher command and ensuring that everyone was tracking with the same information,” Sgt. 1st Class Dillon Dupre, the Non-Commissioned Officer in Charge of the TOC, said. “Just in case something goes wrong with someone’s radio on the ground or anything like that I can monitor what they are trying to say and pass that vital information up higher to actual MEDEVAC personnel or to personnel in the helicopters moving to the casualties.”

Another team member is Adams.

“I really just sit back and facilitate and supervise all the stuff going on with the radio and the TOC,” Adams said. “I basically facilitate all that stuff working together to build a better picture for higher command or just increase situational awareness.”

The goal of the exercise was to prepare everyone involved with CST to properly handle a real-life situation.

“It is a complex exercise,” Bolding said. “If this were to happen in real life you would have people under stress and people who are actually hurting and you want to get them to the best treatment possible in the shortest amount of time. You just want to rehearse all the players so that everyone knows what to do under stress and so that it can happen quickly.”

TOC team members said they were pleased with the outcomes of today’s training exercise. 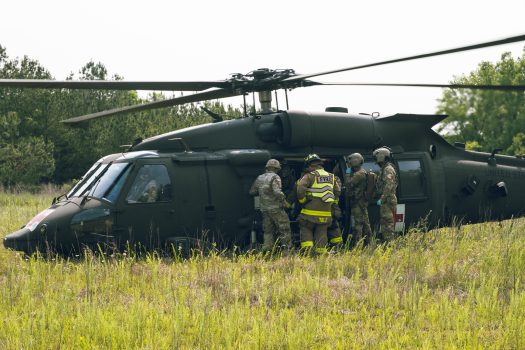 Army and Fort Knox medical personnel move a simulated casualty to an Army Medevac helicopter at Fort Knox, Ky., June 4, 2019. Every summer at the beginning of Cadet Summer Training, a mass casualty exercise is conducted to test the abilities of medical personnel at Fort Knox to respond to such an event. | Photo by Kyle Gallagher, CST Public Affairs Office

“I think it went very well as far as actually getting helicopters on site. We got it there within 18-19 minutes of the incident happening,” Dupre said. “We had great communication between all parties involved in the exercise. All in all, I think it was a great success.”

“I think it went pretty good, for the most part [Casualty Evacuation] is a pretty stressful event but we have done it enough to where we have worked out the kinks and the system is pretty smooth,” Adams said. “We do not want a bunch of people emotional and freaking out over something or anything that happens.”

While today’s exercise may have been a ‘game’ those involved hope none of systems and processes practiced today are ever needed.