Cadets from 2nd Regiment Carlie and Delta have two hours to locate two points, and they must find at least one in order to pass. Cadets use a protractor and a map of the area to plot their points. After that they use their maps and compasses to navigate to their points.

Capt. Jason Dubyoski, from The Citadel said, “[The Night Land Navigation] tests [Cadets’] ability to navigate to points dismounted in the dark in hours of limited visibility.” 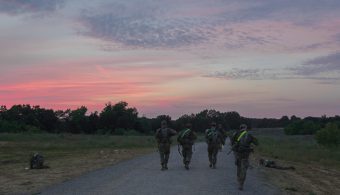 Dubyoski mentioned that, “some of them struggle to shoot a good azimuth using the compass.” It is also possible that a Cadet will plot their point incorrectly on the map. Dubyoski said that it is easy for things to go wrong during land navigation, but even more so during the night test. Cadets must watch out for holes that they may fall into.

Cadet Andrew Miranne, from Gonzaga University, said, “It has helped my confidence, being able to go out into unknown terrain and being able to find a point. Most of us have never done land navigation here so, to come out here to an unknown place shows whether or not you can do land navigation.” 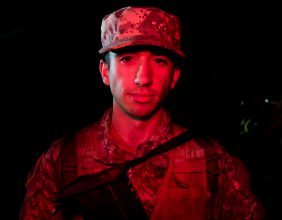 “Fort Knox does not have any elevation or terrain features and it is pretty easy to find a point. You have to follow one road or dead reckon until you find your point. The vegetation is extremely thick so that was always hard. The wildlife is dangerous, and you never know what you are going to find. Other than that, it was not the most difficult.”

Miranne recommends for Cadets to locate as many land navigations points as possible when they practice it at their school. At Gonzaga University, Miranne had to locate eight points, but must find six in order to pass.

Cadet Magdiel Rivera, from Florida State University, said, “At my school, we have practiced a lot with night time [land navigation]. Usually where we do it is pretty dense vegetation so coming here to Fort Knox it was not too difficult. I am used to big and pretty tough terrain.” 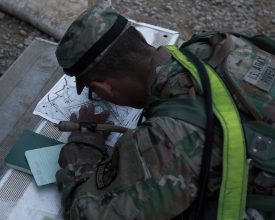 Rivera said knowing how to locate points “helps us be leaders, mentors and instructors for those who are going to be coming in the future to CST. The more we known land navigation, the more we can teach.”

When asked what advice he had for future Cadets that go through Night Land Navigation, Dubyoski said, “Use the known points as much as you can, get as close as possible using obvious features like a 90-degree turn. The checkpoints out there are essential as far as using the checkpoint to navigate to the point.”