Fort Knox, Ky.—Teamwork and trust are not values unique to the Army but they certainly are highly emphasized. 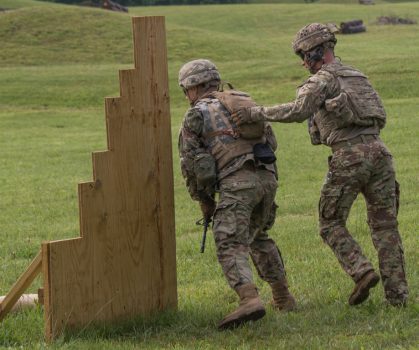 Through the exercise Cadets are paired with a partner to work with to effectively and safely move down range while engaging targets.

These pairs of battle buddies now had to put their trust of one another to the test.

“I like that I got picked with a really good buddy of mine to do this live fire, so I would say that the environment has been my favorite part of this event.” Harding said.

Cadet Sahelanda Gelin, from Broward, Florida, a student at Florida A&M University, said she really enjoyed the partnership aspect of the training and knowing that someone had her back. 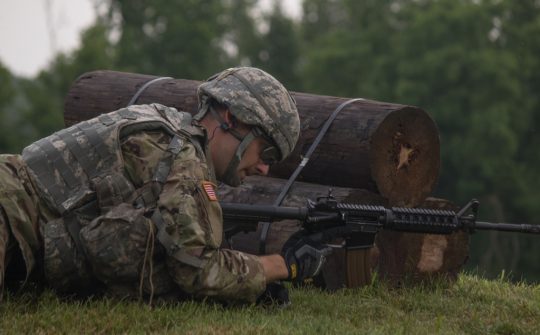 Cadet Aidan Kidd from The Citadel, checks to make sure his weapon is on safe before moving during the first-ever Buddy Team Live Fire performed at Advanced Camp on June 6 at Fort Knox, Kentucky. | Photo by Reagan Zimmerman, CST Public Affairs Office

“My favorite part would honestly have to be being out there with my partner and seeing how we worked as a team and everything, him covering me and having my back while I while I was moving to the next objective.” Gelin said.

Teamwork and trust were put to the test upon the Cadets arrival at Woods Range Thursday morning when it was time to begin the live fire part of the training.

Cadet Anthony Kniffin from Landrum, South Carolina, who attends The Citadel, the partnership aspect of the training gave him the motivation to keep going.

“Definitely running down the range with the vest on you realize how out of shape you can be but when you say ‘I’m moving,’ that was the moment when you realize ‘great, I have to get up and run again,’ but as soon as you hear your buddy say ‘I’ve got you covered,’ you know that you have to get where he is. You are no longer running for yourself anymore but you are running for them,” Kniffin said. 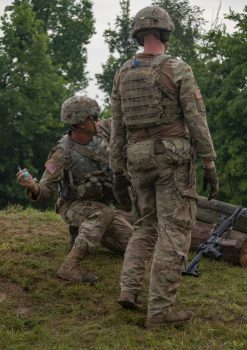 Cadet Shuyang Dong from the University of Minnesota, releases a grenade to finish his lane, as Sgt. Dakota Siemering of Brighton, Colorado, acts as his safety during the first-ever Buddy Team Live Fire performed at Advanced Camp on June 6 at Fort Knox, Kentucky. | Photo by Reagan Zimmerman, CST Public Affairs Office

The idea of having someone cover your back is appealing to everyone.

“It is actually very cool and amazing because that is what the Army is about.,” Gelin said. “Covering each other and making sure each other is held accountable. At the end of the day we are individuals after the same purpose. Always knowing that when you look over your shoulder you have someone behind you.”

“We are on the same team practicing for our future careers and bettering each other,” Hardin said.

Kniffin said that trust in the person covering your back makes the exercise and life in general less scary.

“If you can’t trust the guy on your left or your right, then you are out there alone,” Kniffin said. “Everything is scarier when you are by yourself.”

One Team, One Fight