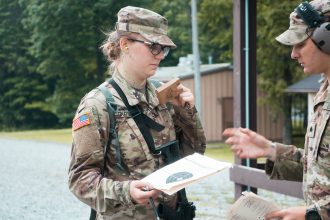 FORT KNOX, Ky – As the sun peeked out from the rain clouds at Fort Knox, 2nd Regiment Advanced Camp Cadets focused their eyes on their target as they fired their weapons during basic rifle marksmanship training yesterday.

To be successful during the day’s training, each Cadet was required to group together five rounds of ammunition in the diamond located in the center of their target sheet.

Regardless of how long it took and how well they did in their first attempt, some Cadets still continued to attempt to better group their shots and zero in on the target. Elizabeth Tom, a Cadet from Weber State University, was determined to keep trying to get better 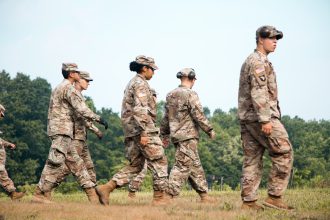 “They want it to be very accurate and precise and I guess I am grouping, I basically can’t get it right in the center so, it’s just a lot of adjusting. Learning to adjust on my own that’s pretty tough because I never had to adjust on my own,” said Tom.

As it took some Cadets longer to adjust themselves and continue to retrain in zeroing in on the target while grouping their shots, some Cadets were not having as much difficulty.

Shaunay Palmer, a Cadet from Alabama A&M University, could see that some were having a hard time and getting frustrated.

When asked what advice she would give to her fellow cadets, she said, “follow the four fundamentals, breathe, trigger squeeze, follow through, etc. Don’t think about it too hard, don’t rush, it’s no rush.” 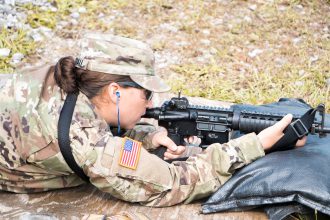 Cadet Mattie Cantrall from Georgia Southern University looks down her sight as she aims at a target at the Handiboe Range at Fort Knox, KY. Cantrall is currently vying for Recondo, an end of camp award for Cadets who successfully meet eight criteria throughout camp. | Photo by Hannah Hedden, CST Public Affairs Office

Georgia Southern University Cadet Mattie Cantrall is vying for the Recondo Award that cadets receive at the end of camp.  There are eight criteria a cadet must meet for the coveted award and rifle marksmanship is one of those.

So rather than settle with an okay zero, she kept firing to try to get her shot group as tight as possible.

“You’re out here all day, so shoot all day,” said Cantrall.

Cantrall is confident that she and her fellow Cadets will get a go at Group and Zero and be prepared for weapon qualification.

“I will be ready [for qualification] because we have a whole ‘nother day of training. So, we’re only a mere two hours into two days of training,” she said.