FORT KNOX, Ky – There was a break in the rain at Fort Knox when Advanced Camp 3rd Regiment began its Land Navigation testing. Although it was cloudy, muddy and 7 a.m., Cadets wore a smile on their face and were excited to start the day. 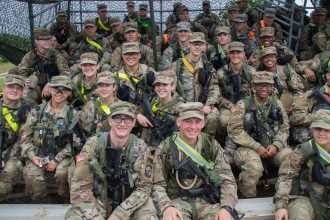 Just like the 1st and 2nd Regiment, Cadets received a map, points to plot, and then tasked with finding these given points within a four-hour period. Cadets must locate three points to pass the event, but to stay in the running for RECONDO, they must find all four of their points.

Within the four hours, the majority of Cadets were able to locate their four points; however, some were unable to complete the mission. Some Cadets, such as Jack Buck from Virginia Military Institute, had plenty of land navigation experience and, in his opinion, had easier points to find compared to others. 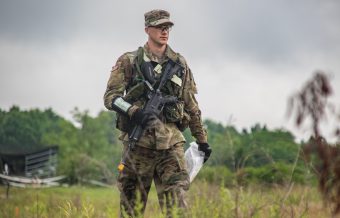 Cadet Paul Wallenhorst, from the University of Louisville, moving on to find his next point during land navigation at Fort Knox, June 7, 2019. |

“All my points were basically in a 500 meter square right on an annex of trails so I bounced off one trail to the other. My one hard point I ran into yesterday by accident,” explained Buck, who was the first to finish and did so in under an hour.

Buck considered himself lucky because his school had multiple courses he could practice on to gain land navigation experience. He also shared that his hardest point was one he came across yesterday when his Regiment refreshed their land navigation skills.

Other Cadets were not as lucky as Buck regarding past experience and points given. Timothy Wright, from Harding University, was trained in a different type of land navigation before arriving at Fort Knox.

“My school focused on Dead Reckoning, which is plotting two points, getting your distance, getting your azimuth and going straight through whatever you have to get through,” said Wright. Even though he was not as experienced with terrain association, Cadet Wright is thankful for the chance to be able to learn this type of navigation at Fort Knox. He passed land navigation with all four points. 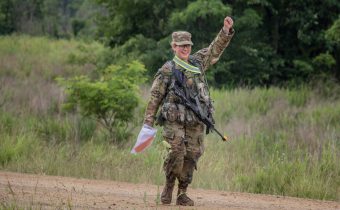 Cadet Sabrina Barry, from Salisbury University, raises a fist in victory as she finishes her land navigation, successfully finding all four points at Fort Knox, June 7, 2019. |

Sabrina Berry, a Cadet from Salisbury University in Maryland, has some experience with land navigation from her school’s ROTC program, but said that this specific one was quite difficult. “I’ve been doing [land navigation] since my freshman year in ROTC, but this one is definitely the most challenging one I’ve done. The distances are really far, and there’s lot of inclines and hills which I’m not really used to,” said Berry. Though this terrain was difficult for Berry, she too located all four of her points.

When asked what her strategy was going into today’s land navigation, Berry stressed the importance of having confidence, something she learned throughout her time in ROTC. “If you over think it then you’re going to fail. You really have to trust yourself, trust your judgement, your equipment and your prior knowledge and then you can accomplish it,” explained Berry. 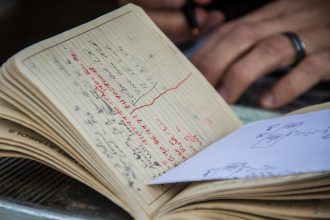 During land navigation, 3rd Regiment U.S. Army Advanced Camp Cadets are given a map and protractor that they use to navgate through the terrain and find up to four points at Fort Knox, June 7, 2019. |

Cadet Buck explained that he was most confident with land navigation out of all of the events his regiment is required to complete this summer at CST. He wants to become an Armor Officer and thinks that this training event is very beneficial for his future career.

Over the course of the four hours, Cadets arrived at the grading tent with soaking pants, wet socks, and their smile was replaced with a tiresome face.