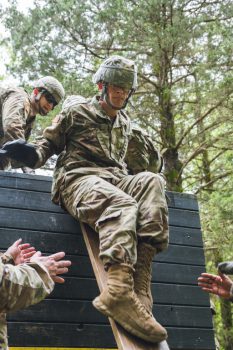 The Field Leader Reaction Course (FLRC) puts Cadets, separated into squads, through obstacles that are modeled after situations that Soldiers have come across in historical American wars. To successfully complete an obstacle, the Cadets must get specific equipment through, as well as each squad member.

With each new obstacle, a new Squad Leader is appointed. This offers a change in team dynamic with each different challenge. Some leaders take charge, others try to open more decision up to their squad, and still others are more timid, handing everything over to their squad.

“The Field Leader Reaction Course is designed to test each of the new squads by allowing each Cadet an opportunity to exude peer-to-peer leadership,” Lt. Col. Daniel Gregory, Professor of Military Science at the University of Hawaii, said.

Gregory said that Cadets should come to the FLRC ready to fail. Failing is both okay and expected. It causes them to reassess their plan and adapt to the changing challenge.

Each leader is different, and attempts the obstacles in different ways. 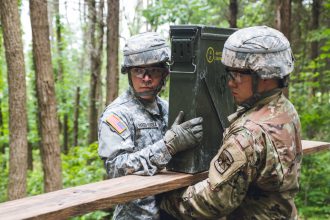 Cadet Andre Pardo-Rivera (left), from the University of Alabama at Birmingham, and Cadet Elijah Rodgers (right), from University of Rhode Island, secure a ammo can at the Quicksand obstacle during the Field Leader Reaction Course (FLRC) at Cadet Summer Training in Fort Knox, Ky., June 6, 2019. | Photo by Kyle Gallagher, CST Public Affairs Office

To combat the strengths and weaknesses exhibited by different leaders, Cadre may throw a hitch in the activity.

“Depending on how well the squad is doing, we can turn the obstacles up or down in terms of the intensity,” Gregory said. “Particularly, if you have a squad leader that’s not necessarily being that bold leader, if they’re being a little timid, we can tell the rest of the squad that the only person that can talk is the squad leader to try to create space for that timid leader to start blossoming.”

Cadre often create backstory and detail as to why the squad can no longer talk; for example, some may say that CBRN detected poison gas and it has infected every squad member except the squad leader.

With strong leaders, Cadre may tell them that someone has been shot in the arm and they may only work with one arm now. Watching how that leader adapts and overcomes can say a lot about that Cadet’s leadership ability.

Some Cadre will use this to have fun with the Cadets, and keep the Cadets in a relaxed environment. Many create scenarios that only allow Cadets to sing in order to communicate, while others have to talk like Mickey Mouse characters.

The fan favorite from the Delta Co., 2nd Regiment Cadets was talking like “frat boys,” throwing around phrases like, “sick, dude,” and “nah bro.” 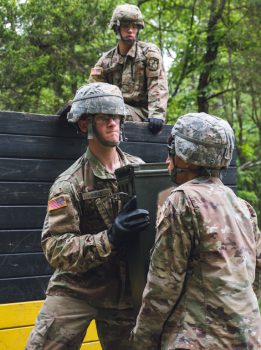 Squads come in after knowing each other for only a few days, so this is when many begin learning to work with the different personalities.

“It really depends more on what group [squad] it is,” 2nd Lt. Jacob Seibert, a recent graduate and commissionee from the University of Southern Mississippi, said. “Some of them are more efficient working together and some of them aren’t.”

There are always strategies to use, however, when tackling the Field Leader Reaction Course.

“I think it’s just important that we all work together,” Cadet Cameron LeFever, from Cedar City, Utah, and attending Utah University, said. “If we have unity, even if it’s not the best idea, as long as we have unity, it can work.” 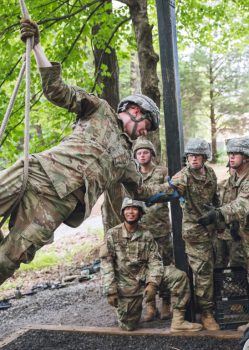 LeFever stresses that the whole point of the FLRC is to teach Cadets how to efficiently work together. Communicating successfully and relating to one another, at least being open to the other squad members’ ideas is vital to a strong FLRC run.

“It’s been challenging,” Cadet Lauren Archer, from Salina, Texas, and attending the University of Arkansas, said. “We haven’t accomplished a mission yet.”

Archer was positive about her squad’s situation, though. They were having fun and they were working together, she said.

“You have to be really creative and think outside the box,” Archer said.

A Direct Approach to Indirect Fire