FORT KNOX, Ky. — Before Cadets go out for Land Navigation (Land Nav) they have to make sure they know how to use the equipment so they don’t lose themselves out in the almost 1,800-kilometer training field.

Cadets from 3rd Regiment Charlie and Delta Company were given a test today to make sure they understood how to read a map and use the equipment they will be given for the practical testing later on in Advanced Camp.

Maj. Earl Roloff, an Assistant Professor of Military Science at the University of Arkansas, was the Cadre overseeing the test. He expanded further on why this written test was such an important first step for Land Nav training. 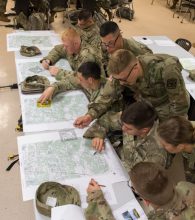 “We want to make sure that they know how to read a map, and are able to find where they are in case they get lost,” Roloff said. “And they have the basic skills necessary to understand what’s on the map in terms of terrain features, grid squares, how to move around and to translate that to on the ground.”

And while a written test on basic map reading may not sound like the most exciting thing to do. Cadets were quick to understand its importance.

Nicholas Cardona, a Florida International University Cadet hailing from Miami, Florida, gave his explanation on why this was not only important to him, but all Army personnel.

“It’s important to do Land Navigation because that we need to understand the fundamentals,” Cardona said. “We rely so much on GPS, trackers, and if those systems go down, we need to rely on a map, compass and protractor. So being able to recognize key terrain features, contour lines, what the colors mean on a map are crucial to any Soldier. It doesn’t have to be an officer; it could also be enlisted. The lowest person in the line should be able to know this.”

Others were more than happy to offer advice to future Cadets who will be tackling this test later in the summer and beyond.

Destiny Rosario, of Arlington, Texas, was one of these Cadets who had advice. 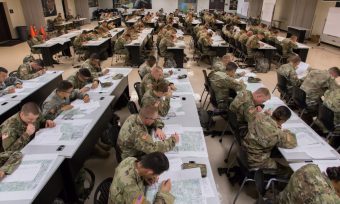 Vincent Sanchez, from Colorado State University and Fort Collins, Colorado, expanded on this advice with his own perspective.

“Pay attention in class, study and get out in the field as much as you can,” Sanchez said. “Work on it. Definitely understand how to orient a map. Intersection, resection and all that good stuff. You may hear it a thousand times, but it is important. Because truly there will be a time, if you are ever deployed, that something will break and you are going to need to rely on your skills. You’ll get lost, and little did you know, you’ll be 30 years old in Afghanistan and you’re going to be relying on skills you learned when you were 18 as a Cadet.”