FORT KNOX, Ky. – If you’re a Cadet doing First Aid Training during Advanced Camp, Randy is a great partner to practice on. He’s not likely to complain or move around as you treat him.

Rescue Randy is the nickname given to the mannequins used during First Aid Training. Cadets of 3rd Regiment, Advanced Camp separated into small groups and surrounded a “Randy.” Then, trainers explained how to perform several different medical procedures on the life-size mannequin. 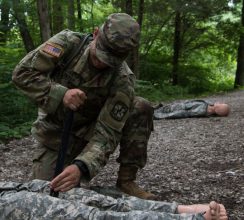 Colorado State University student, Cadet Kyle Pieper from 3rd Regt. applies a tourniquet above Rescue Randy’s leg wound as part of his First Aid Test on Thursday, June 6, 2019, at Fort Knox, Ky. All Cadets must go through the First Aid Training so they are prepared to deal with wound Soldiers in the field. | Photo by Makayla Holder, CST Public Affairs Office

First, Randy had to be treated for an arterial bleed right above the knee. Randy was in a lot of pain and bleeding from his wound. Cadets learned how to place a tourniquet above the wound, which was simulated with red tape or marker on Randy’s body.

Randy has an open mouth and nasal cavity, enabling Cadets to learn how to correctly insert a nasopharyngeal airway. They pushed a tube through his nostril until the other end reached his mouth. This ensured an open airway, even if Randy’s tongue was to relax.

Raven Adajar, a Cadet attending Rutgers University, said he already has some experience with First Aid Training through his university. According to him, it’s much better to practice on a mannequin than an actual person.

“I actually had the nose tube put in myself,” he said. “It was an interesting experience. I don’t want to do that again if I don’t have to.”

The Cadets continued to learn how to check for broken bones and basic injuries by using the mannequin. They had to actually place a field dressing on a simulated venous bleed on Randy’s arm, as well as treat an open chest wound.

With 30 different training sites, there are at least 30 mannequins at the location. Each Randy

Cadet Anna Dinovo, a student at The Citadel, from 3rd Regt. prepares to wrap Rescue Randy’s arm wound as part of First Aid Training on Thursday, June 6, 2019, at Fort Knox, Ky. All Cadets must go through the First Aid Training so they are prepared to deal with wound Soldiers in the field. | Photo by Makayla Holder, CST Public Affairs Office

must undergo these treatments several times this summer; thousands of Cadets must go through First Aid Training as part of Cadet Summer Training.

The mannequins are able to withstand the rough treatment. They only weigh about 30 pounds, making them easily maneuverable. If a Randy does start to deteriorate from multiple uses, many parts are replaceable.

Sgt. Jason Massey, a combat medic who is training Cadets this summer, explained the practicality of the mannequins.

“They’re pretty durable,” he said. “All these pieces and parts, the skins, you can just take off and order a new one. All this stuff will unbuckle from him, and then you just buckle it back down. So, Randy’s pretty much immortal. He will live forever.”

After the Cadets completed their training with Randy, they had to pass a test to successfully complete this event. Learning these procedures are vital for their future as commissioned officers in the U.S. Army.