“All basic training soldiers have to throw two live hand grenades. So, as future officers and leaders of America, why would we not be held to the same standard?” asked Cadet Sean McCarthy, from the University of North Carolina at Pembroke from the 1st Regiment Advanced Camp.

The answer to that question is that they [cadets] are “held to the same standard.” At least as of this year’s Cadet Summer Training, where the Cadets are required to throw two live grenades.

In order for that to happen, the Cadets first had to demonstrate their ability with practice grenades. The Cadets received an hour-long instruction class called Distance and Accuracy. During this, Cadets were allowed three practice throws.

The first throw was the distance and accuracy throw, then a familiarization throw and finally a go-no-go throw. The final throw determined whether or not a Cadet could proceed to the live bay.

Those who did not make it past this first stage were put in a different group for additional training.

Cadet Christopher Thompson, from Alabama A&M, said today’s training is important to know because “we will know what we are doing, and know the proper steps to take care of ourselves.”

Cadet Kenny Ji, from Virginia Tech, has never done anything like this, but successfully got all three-practice grenades past the barrier.

“When I was using the mock grenade it was not that scary because it will not do anything to your body,” Ji said.

But, once on the live grenade range, he experienced different feelings.

“It was kind of intimidating and a little petrifying, because it is an actual live grenade,” he said. “A simple mistake can really hurt you on the actual [grenade] range, and that was a little intimidating.” 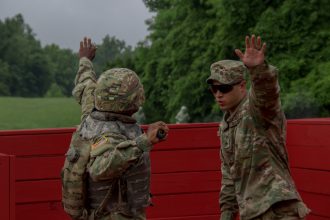 Hearing encouraging and motivating words from NCOs helped Ji when it was his turn to throw his grenades. The NCOs helped keep him calm and patient.

“If you are leading a platoon, and you do not know how to throw a grenade, as an officer that is kind of embarrassing. You have to go through all the stuff that the soldiers are going through,” said Ji.

The biggest things that Ji learned today were: “to be patient, calm, confident, and an example.”

Many Cadets, such as Ji and McCarthy, agreed that getting to throw the live grenade was their favorite part of the day.

Going into his second turn, Ji had more patience, a better composer and more confidence.

Ji enjoyed this training activity so much that he hopes “this continues to the next regiments, camp, year, and on and on. It was a really good experience.”

The trust the NCOs displayed by allowing Cadets to launch grenades did not go unnoticed by Ji.

This was McCarthy’s second time at a live grenade range, and he enjoyed it both times.

Although, his first time he was nervous, McCarthy was not timid today, since he knew what to expect.

To prepare to throw grenades, McCarthy said, “we did kind of a crawl-walk-run phase, so it was pretty laid back. Once you got out there, you knew exactly what you were doing.” 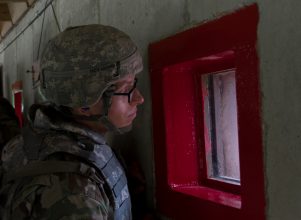 While waiting their turn, Cadets watched through small windows in the cement barricade separating them from the blast zone as others tossed their grenades.

Master Sgt. James Knight, from Monroeville, Al., said this training, “familiarizes [Cadets] with a weapon system that they do not utilize very often, and it instills confidence in their abilities to employ it.”

Knight’s favorite part about this exercise is “the big smiles once [Cadets] come off the range knowing they could do it, and that they did it safely.”

“Do not fear the weapons system, it is there to help you out,” was Knight’s advice to future Cadets who will go through the live grenade range.