FORT KNOX, Ky. – Throughout Cadet Summer Training, there are many events that Cadets are fearful of or struggle to complete.  It may be getting lost during land navigation, rappelling off a 64-foot tower, or shooting a rifle, but for many, this fear comes out at the live hand grenade range.

That fear surfaced for 2nd Advanced Camp Regiment Cadets this morning at Christensen Range.  Each Cadet has their own way of facing their fears.  Cadets David Hall and Kenneth Walker handle their fears by focusing on their families and the sacrifices made to get them where they are today. 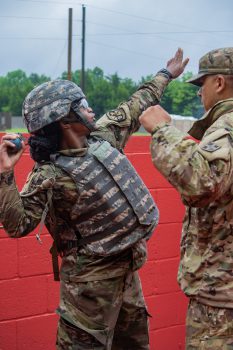 Cadet Shaunay Palmer, from Alabama A&M University, gets into position to throw her test grenade before moving on to throw a live hand grenade at Fort Knox, June 8, 2019. | Photo by Jodi Moffett, CST Public Affairs Office

The morning began with Cadets practicing the proper stance and movement with dummy grenades.  Walker, who wants to become a military police officer once he commissions, struggled to master the proper throwing technique.

He fell twice in the practice pit because he was nervous about the live grenade. “If you focus on everything they tell you to do, as far as going through the steps and not worrying about anything else, you’ll be alright,” advises Walker.  After practicing, Cadets moved to a different location on the range to throw live grenades.

Hall, a student at Utah State University, was nervous to throw an actual live grenade.  Even though he doesn’t believe it will directly benefit him with his desired job in the Army, he was excited to learn.

Flying is a passion of Halls’ and he hopes to become a Black Hawk pilot once he becomes an officer.  “[This training] really doesn’t directly relate at all to what I want to do as a pilot. I’m probably not going to be flying around with grenades in my pockets.  But every Soldier needs to have a basic understanding of basic warrior tasks and drills so that they can be a frontline Soldier because that’s the backbone of the army,” explains Hall.

Only twelve Cadets completed the training before Explosive Ordnance Disposal (EOD) technicians arrived to deal with a dud grenade, enhancing some fear in Cadets.  By protocol, Cadets and safety Cadre were not allowed to leave the throwing pit and others were not allowed to move from behind the safety wall.  After EOD detonated the grenade, training resumed. 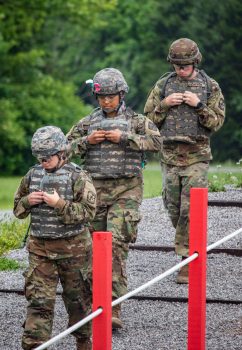 Around four years ago, Walker joined the Army National Guard and was exposed to hand grenades; however, today he had a new experience.  Over the intercom, Cadets and safety Cadre would hear “Prepare to throw” followed by “Throw”.  After this command, one Cadet at a time would throw one of their two live hand grenades toward a target.

“Throwing the live one is kind of nerve-racking.  You get up there and you realize that you have a live grenade in your hand and you start shaking a little bit, your palms get sweaty. Safety told me everything was going to be alright, you just go through the steps,” said Walker.

Both Hall and Walker expressed how their inspiration to become Army officers came from family members.  Their family is also what motivates them to keep going through all the difficult times during training.

Hall, 25, is a husband and father of two.  His father enlisted in the Army around 1995 and left the Army ten years later before joining the Army Reserves in 2015.  This was a large motivator for Hall to become an officer.

Another large impact in Hall’s life is his wife, Kayla, and two kids, Reagan and Liam.  Currently, Kayla is a stay-at-home mom taking care of their kids in Utah.  Reagan, who is almost three, recognizes her dad and, according to Hall, is quite talkative.  Liam, who is almost a year old, recognizes his dad’s face whenever they get to FaceTime.  Hall also has support from his parents, as his mom is visiting Kayla and the kids for the next week to help out while he is away. 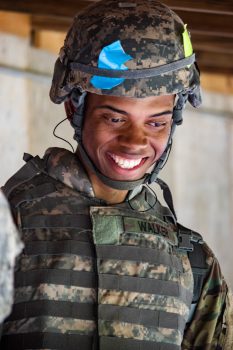 Walker decided to begin the path of becoming an Army officer after a tough childhood in Atlanta.  “Honestly, I needed to start a new lifestyle, a new trend in my family.  I had it rough growing up,” explains Walker.  Because of some family difficulties, Walker’s grandfather took him and his six siblings in when he was a young boy.  Shortly after this family transition, his grandfather passed away.  From here, his siblings were split up.

His two youngest brothers were put into the adoption process and found separate homes shortly after.  Since the adoption, Walker has only seen one of his brothers.  “It’s iffy because they grow a bond with that family and start calling them mom and dad. There’s a certain time for everything,” Walker explained.

Walker and two of his sisters were taken in by his aunt and uncle.  His uncle, who served in the Army almost forty-four years ago, not only was a father figure, but made a huge impact on Walker joining the military.  “He was really hard on me. He taught me all the discipline that I know now, and helped me shift gears going into the military,” said Walker.

Walker was without words for the gratitude he had for his aunt and uncle.  He explained, “They both had plans for retirement, they gave it up to help us.”  Now, Walkers sisters attend Clayton State University and he is looking forward to becoming an Officer in the Army.

Cadet of the Week: Kyle Wolfe