“It is part of a four-day process starting with primary marksmanship instruction (PMI), going into grouping zero, location of misses and hits so they can see where on the targets they are hitting and then culminating here with the qualification range,” said Marta.

In the past, this was not a must pass event. This was available so Cadets could familiarize themselves with the weapons. In order for Cadets to pass their qualification test, they must shoot 23 out of the 40 pop-up targets. 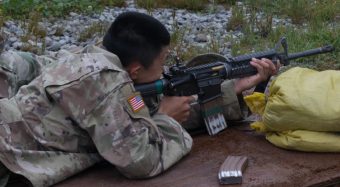 Cadets must shoot targets using three different positions: prone, where the weapon is supported on two sand bags, prone unsupported, where the Cadet is using his or her magazine to support the weapon, and, lastly, the kneeling position.

“Everything that a Soldier does at basic training, [Cadet Command] want Cadets who are future officers to do, too,” said Marta, “If a private coming out of basic training is expected to do it, then the officer should too.”

According to Marta, many of the Cadets who come through this four-day training have never used a gun before so they do not have any bad habits that need to be corrected.

“We are not teaching anything incredibly difficult here,” Marta said, “I truly believe you can take anybody not in the military, run them through this four-day course and they would know how to shoot by the end of it very well.” 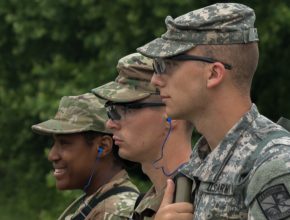 Fundamentals are important in order to shoot successfully. Some of those key elements are “things like: good body position, how you pull the trigger and how you are aiming. It is nothing crazy and nothing super far advanced” according to Marta.

Marta thinks another issue is “that the eye is a muscle, and that usually becomes fatigued, especially when looking down the sight. Then the stress of having to qualify [is] magnified by that fatigue [from their eye].”

Marta said that 90% of Cadets finish their qualification test before noon. He also said, “You are beating a dead horse trying to get” the last 10-20 Cadets who do not qualify to do so.

Since completing basic training in 2013, he feels like the doctrine for shooting keeps getting simpler and simpler.

Cadet Mark Powell, from Marquette University, shot 34 out of 40 targets, and this was his best score yet at the range. Some of the ways that Powell prepared for today’s qualification test is by “practic[ing] without firing, basic breathing skills and trigger control.”

Powell struggled most with being patient and taking his time. When he missed a popup, he knew it was because he was shooting too fast.

“I learned that patience is key, just like anything in life where you do not want to rush your shots. If you are too quick, you will probably miss,” said Powell. 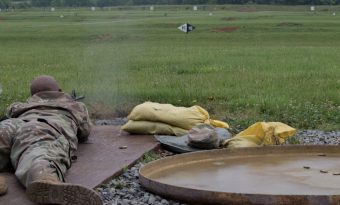 Stephanie Martinez, from Indiana University Purdue University-Indianapolis (IUPUI), said the most difficult parts for her today were “after we woke up, they just took us out to start shooting. We started shooting right away, and on top of that the pop-up targets really blend in with the background.”

Martinez’s favorite part was hitting the 300-meter popup, because that was the furthest target.

Julia Rocha, from Morgan State University, said this qualification test is important because, Soldiers in the Army have to qualify every year, so this gets Cadets used to that.

Since joining the Army two years ago, Rocha said that she can see herself improving. She said, “I understand the fundamentals, now. Usually [the Cadre] say the same thing over and over again, and it is starting to make sense.”

Staying calm and keeping her breathing steady is what Rocha struggled with most today.

To future Cadets, Martinez said, “Have goals in mind and do not try to just meet the standard.”