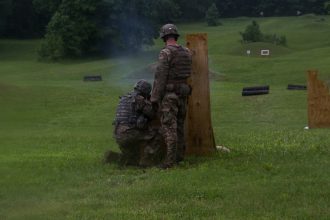 “The focus is to have full control of your movements to bound in buddy pairs while engaging targets while maintaining cover and appropriate individual movement techniques,” said Cadet James Crosby, Washington University in St. Louis.

2nd Lt. Eduardo Gracia went into depth about the Cadets training.  He explained that Cadets negotiate the lane in buddy teams; lining up at the starting barriers. Once they have the go ahead, one provides covering fire while the other bounds to the next barrier.  One Cadet will continue to cover their partner as their partner moves ahead.

Communication is key to ensure one Cadet provides cover while the other bounds. “Bounding is when you run for three to five seconds then you will drop to the ground and you keep doing that until you meet your destination,” said Gracia.

Cadets are with their buddy through the entire process. When Cadets first start they must communicate who covers and who bounds.

The training of the Cadets is important but safety is even more important.

For some Cadets this pushed them out side of their comfort level. For Cadet Nicholas 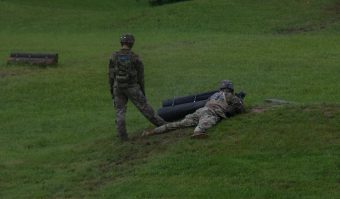 Armeni from Youngstown State University, he is confident in his shooting outside the program but he has never shot with a battle buddy before; this experience brought confidence to him that he would be able to trust his battle buddy.

For others it brought confidence to their skills in handling a weapon. “ I think one thing was I haven’t handled a rifle much before this training experience, so just being aware of something that is so powerful in your hands,” said Bailey.

What many Cadets are finding is that the Army sets them up for success in all of the training they do here.  Success built through teamwork, either as a large group or as a pair on the Buddy Team Live Fire Range.

“Everything in the Army is about teamwork. If you can’t work together as a team you will fall apart,” said Crosby.