Leadership. It is a word that the Army prides itself upon. The Army is made up of thousands of Soldiers who live and give their lives for their country. The job is not for everyone. You have to have a certain desire and tenacity to serve and lead for a higher calling.

Leaders by definition are “the person/people who lead/s or command/s a group, organization, or country.” Here at Cadet Summer Training (CST), Soldiers take on the task of preparing and making the future leaders in our country’s Army. 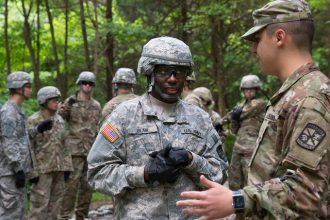 Cadet Shanesha Blair, Grambling State University, Bravo Co., 3rd Regiment Advanced Camp, listens to a mission briefing before acting as the squad leader for the Double Culvert obstacle. Blair was tasked with leading her squad and an ammunition box through the obstacle. | Photo by Kyle Crawford, CST Public Affairs Office

Capt. Vernita Handsborough, who teaches at Georgia Military College, gave her definition of leadership. She said, “Leadership to me means that you have the intentional fortitude in order to go the extra mile. Pretty much it’s that person that influences the other person. Someone that has an impact on a person, motivates them, encourages them.”

She continued, “That is what allows that person to trust them because leadership involves trust of course. And if that subordinate trusts that leader then of course then they are able to be led by that superior.”

Sgt. Daniel Miller a CST Cadre member said, “My definition of a leader is someone who knows how to take care of their Soldiers, obviously in the right way. Taking care of your Soldiers isn’t necessarily letting them go early and stuff like that. But its guiding them in their job and their duties every day. And making sure in their off time that they make sure their personal life is okay.”

Master Sgt. Jaime Castro, another CST Cadre member, gave two definitions of what a leader is. He said, “A good definition of a leader is somebody who is embodying the purpose to give guidance, direction, and motivation to their subordinates.”

Castro followed that with, “That’s a bookend answer, but on a personal, professional opinion. It’s somebody that understands that they are responsible for someone’s life and they take that to heart. So, they will do the best that they can to learn and better themselves so that way they can preserve that life, because without lives they understand that the mission cannot be accomplished. So they know that they have to achieve in taking care of their Soldiers.”

The Cadre members above have been a part of CST for varied amounts of time. They all appreciate the program and spoke about why it is an important process for Cadets to take part in. 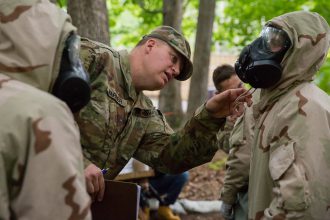 Miller said, “The training that they get here prepares them, when they get to a unit to kind of understand what enlisted Soldiers go through. From the time they start their enlistment to when they get to the unit. So, they understand a little bit more of what their soldiers have gone through to get to where they are right now.”

Handsborough had high praise for CST. She said, “This program to me is just an awesome program. It really is an environment that allows the cadets to become leaders. Not only as technical leaders, but in a tactical environment. It teaches them how to be self-sufficient, how to survive in a field environment, and also team work, building each other up as a team.”

With his passion, Castro once again gave two separate answers. He said, “Us senior leaders, whether that is sergeant first classes and above to master sergeants, and our captains and our majors, we are assessing them and we are providing them with the feedback on what to sustain and to improve as far as their leadership attributes and their competence as they go. That would more so be the book end answer.”

He continued, “But again, on a professional opinion. We actually take the time to coach them and mentor them and give them insight as to how a leader is supposed to be. And we also lead by example. These Cadets look up to us, and somebody is going to be a major influence on them. That is how CST gets into the grit of actually forming and molding them into leaders.”

How does that passion and desire to build our future leaders transfer over to Cadets?

Cadet Nikolas Guevara from 3rd Regiment, who attends California State University, Sacramento, and is from Folsom California, gave a testimonial on his own experience.

What is a leader to you? How do they perform?

“Leaders, it sounds kind of stereotypical, but leaders lead from the front. They should be setting the example.”

How do you prepare yourself for the leadership positions you have to take on here at CST? 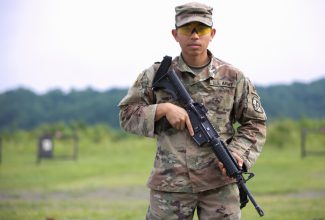 “Well, I went over the Ranger handbook a lot, and I went over a lot of the notes I took during the lectures for ROTC military science classes.

Also, for the weeks after finals, I didn’t change my schedule at all. I wouldn’t do anything crazy over the summer, and kind of just stayed in the same routine. Just so my mind would be in the same mindset I was during school, so that I would be performing as well here as I would be at training exercises at school.

I know that CST is over the summer, and I actually chose an earlier regiment so that I could be more mentally in the game, as opposed to waiting around all summer. Then having to come here in the middle of July and kind of just forgetting everything.

So, I just kept myself in the same mindset that I was during school and didn’t really let myself relax which was a good thing. Because here the schedule is non-stop. So, doing that was a good move.”

How do the Cadre lead by example?

“Command presence is a small thing, but it’s very important. They hold that very well here, and they do lead by example. They do lead in the front by, for example, if we’re in the pouring rain, they’re there with us. They’re not complaining. Maybe we might complain a little bit, but they’re the ones that aren’t complaining and telling they’re just telling us to suck our [stuff] up.

And so, it’s kind of like, an image that we should also go for. And be like, okay, our leaders aren’t complaining, they’re not being complacent, we should be doing that too. They’re setting the example. We’re going to be in their position later on in our lives so we should set the example too.

It was like yesterday, no that was like two days ago, where it was just pouring rain, it was just constant, almost like the air was made out of rain. And everyone was complaining, it was just a hot mess, morale was low. But our master sergeant, was just smiling along and singing cadences, and it kind of cheered us up.

And so it was like okay, if we do that later down our lives, then we can like help Cadets and maybe other people, subordinates, get through the same type of [stuff] we’re going through.”