Fort Knox, Ky. – Cadets were instructed to shoot, move and communicate as they navigated down range today during the Buddy Team Live Fire training exercise.

The exercise is designed to teach skills and Army values to Cadets, such as teamwork, self-reliance and communication.

“We are ensuring that the Cadets get a little bit more of a taste like their privates would [get]  going through basic training,” Odom said. “When they leave here and commission next year, they have to lead platoons. We want them to be on a more level playing ground with the enlisted Soldiers they are going to be leading through the field. We’ve got to be sure they can shoot, move, communicate and work as a member of a team.”

To effectively and safely get down range while engaging pop-up targets with live ammunition, Cadets must display strong teamwork and communication skills. 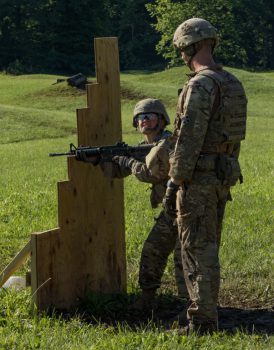 Communication on the range proved to have some challenges, according to Odom.

“There are a lot of barriers. As far as physical barriers, there is the space in between them, noise becomes an issue, there is nerves and anxiousness,” Odom said. “Communication has to be very clear because someone is going to be moving in front of them. They have a weapon with live rounds and they essentially are putting their lives in the other person’s hands.”

Communication between Cadets down range is carried out by yelling commands to a battle buddy. In the future, the Cadets will use varying communications styles to lead their soldiers.

Cadet Gabriel Kruszka, from Sturgis, Michigan, who attends Central Michigan University said he and his battle buddy simply struggled with being loud enough.

“You can always be louder. I have a pretty big voice that can carry but when weapons are involved, you have to be louder than you think you already are,” Kruszka said. “Even if you think you are the loudest person you should always make sure your voice is carrying.”

“I think it is harder because it is so loud and female voices are higher pitched too, so it can get muffled more,” Grunder said.

Not only did the noisiness cause Cadets to yell louder, but the act also instilled confidence in some Cadets. 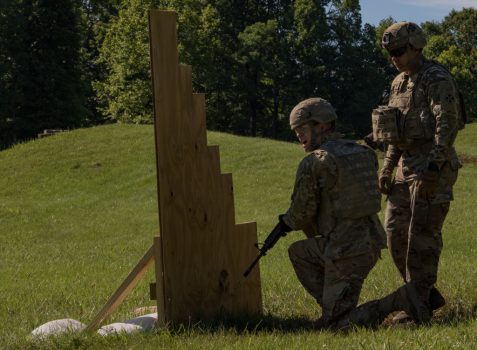 The goal is to teach Cadets the communication process so they can use it in the future to lead Soldiers.

“Right now, we are having them shout these commands to one another,” Odom said. “If they can continue to progress and we had them for another two weeks, it would get to be where it was almost a natural reaction. When a person got the next barrier and pulled the trigger and shot there would be zero need to say set, the other person would know that.”

Odom explained that when Cadets get assigned to units the group use a type of communication called battle drills.

“They have to start at this basic level first, yelling these commands out and then they get to where they can communicate just by looking at one another or hearing a different rate of fire from a weapon that they are shooting from,” Odom said. “If someone is shooting faster they will know that they are keeping someone’s head down and they can move.”

Cadets are not the only ones learning how to communicate properly on the range. Lieutenants are also on the range with radios learning to report back to superiors with important information.

“The lieutenants that are out here, we are getting them used to speaking on the radio, because that is how they are going to win their fights – communicating by radio,” Odom said. “Either requesting more help or adjusting mortar fire or artillery fire that may be miles and miles away. Just painting a picture if you will, for your commander over the radio, so they know what to do to help you out… There is communication for safety here as well as communications to force them to learn and to develop the skills that will help them on the radio when they get out to the force.”

Cadets and Cadre continued to learn and observe the value of good communication as Cadets carried out the training. 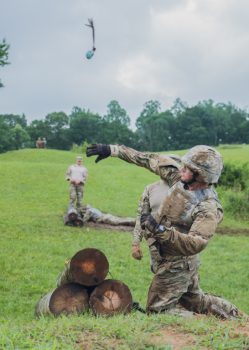 For Odom, the value of communication is an important marker in history.

“Communication is very crucial for us,” Odom said. “It is a driving force and a safety net if you will. We can call in helicopters or jets to drop bombs for us. Without that we return to a stone age basically. If you think about the Civil War, they didn’t have radio but they used flags as a way of communicating across the battle field. Communication is always going to be crucial as a war fighting function.”