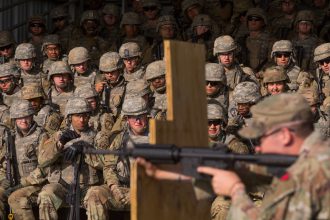 While Buddy Team Live Fire is a new addition to CST, it is a basic tenant to be a Soldier and officer in the Army. Two Cadets, or Battle Buddies, take turns moving down a lane and firing at pop up targets before tossing a dummy grenade at an objective.

The training is broken up into two different phases: blank firing and live ammunition. Today was the blank firing phase. The Cadets also get a chance to practice the movements back at their barracks with their regimental Cadre before coming to the lanes.

Maj. Timothy Harris, a professor of Military Science at Northern Michigan University, was the Officer in Charge (OIC) at the range where the training took place. He expressed concerns for this training, but also outlined all of the precautions they take to keep everyone safe.

He said that while the live ammunition is obviously the biggest concern, he has worked with his non-commissioned officers (NCO) and range personnel to make sure that the Cadets are following proper safety precautions.

But he also added why this training is so much fun for the Cadets as well as its importance to their training.

“This is the smallest level maneuver of fighting we do in the Army. We’ve got one person shooting and one person moving,” Harris said. “The fact that they are going down there and they are doing Soldier stuff, army stuff, with live ammunition and in the mud and all you see when they come back is big old smiles on the Cadet’s face. It’s kind of like a rite of passage for them.”

John Cimino, from Adairsville, Georgia, and a Cadet from the University of North Georgia, was one of the many Cadets who noted on the trust one has to have with your battle buddy during Buddy Team Live Fire. 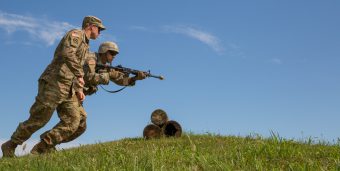 “The big thing about it was that I feel, as a unit, everyone bonds really well during CST and you get to pick somebody that you really trust to go into this event,” Cimino said. “You need like absolute confidence in that person in order to do something like this.”

And it was this trust building he and other Cadets like Jacob Hale, from Knoxville, Tennessee, thought this training should continue to be a fixture in Cadet Summer Training.

“I think after tomorrow, since platoons are starting to pull together more, I think it’s going to build a lot of trust between individuals like Cimino said,” the Carson-Newman University Cadet said. “Especially with a buddy that you are putting live rounds down range, and doing it with blanks is one thing, but actually using real bullets that you can never get back. That’s a completely different thing and it will change it up quite a bit.”

Mytran Nguyen, a Cadet from the University of South Florida, agreed with the other two Cadets but also expanded on why this trust and patience are even more important to an event like this.

“Building trust like everyone else has said,” the Tampa, Florida, native said. “You have to know what you are doing because someone is relying on you and you have to stick to what your training is. Remember what they teach you and just execute it. Don’t just rush through it. Take your time and make sure you are getting it right.”

Other Cadets noted that because they will be future officers in charge of Soldiers, this training will help build bonds between the two types of Soldiers. Cadet Casey Bischoff from Seton Hall University and a Rockland County, New York, native, and Cadet Danielle Kovach from the University of Alabama and a South Bend, Indiana, native were two such Cadets. 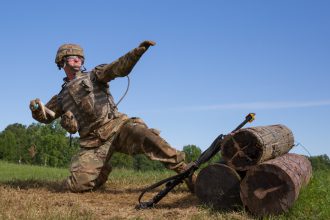 “I think it’s important that this continue because it’s important for future lieutenants to have similar training and similar background to the Soldiers that they are going to be leading,” Bischoff said. “It also builds weapon confidence and confidence within your squad and your battle buddies that you are going through this with. So, I definitely think it’s a valuable steppingstone for camp and your future in the Army.”

“I truly think for me; my squad is very close,”

Kovach said. “This just made us closer, one, and most of the enlisted side has done this before, and it’s important for us to understand our Soldiers better and understand the things we are sending them out to do. But I also took away a true understanding of what they [Soldiers] do when they are deployed.”

And for others, like Levi Hall from Monett, Missouri, who went through enlisted basic camp, it was refreshing to see something like Buddy Team Live Fire is being done by Cadets in Advanced Camp.

“Yeah, they should definitely do this because it gives Cadets an idea of how to find cover, how to fire back and how to communicate,” the Cedarville Cadet said. “With the live rounds you get to see how loud it is and how important communication is. So, this is definitely important especially when we start doing lanes.”