Fort Knox, Ky. – Fourth Regiment Cadets spent their morning wandering through the woods during the daytime portion of Land Navigation.

Cadets received a map, a compass and a protractor to help them locate specific points. After plotting their points they were released into the woods to navigate to those points. Cadets had four hours to find at least three of the four points.

Cadet Antonio Hawkins, from Chicago, Illinois, a student at University of Colorado, Colorado Springs, persevered early on as he struggled to find his first point.

“My first point was very difficult to find and took me the longest to find, but I pushed through and found it eventually,” Hawkins said. “From that point it helped me to build my confidence to make it to the next one.”

Even Cadets who quickly found some of their points still needed the practice in perseverance.

“Some of the distances they have to walk are two to three kilometers, a long distance sometimes in the heat, the weather, and the elements and it can really wear on them,” Sims said. “That perseverance to be able to go through and work through this course helps them out.” 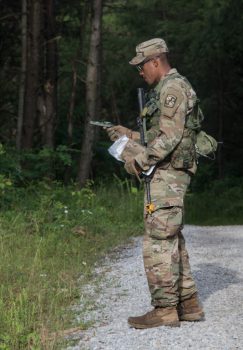 Along with perseverance, Cadets also needed to display confidence to complete this exercise successfully.

Cadet Kaitlyn Morrow, from Huntsville, Texas, who attends Sam Houston State University, said her lack of confidence in herself was a major obstacle for her.

“The biggest challenges were probably seeing the other Cadets out there going their own ways and maybe thinking that they were headed to your point too and following them but then realizing they weren’t going that w ay and you had to stay confident in yourself,” Morrow said.

After finding his first point, Hawkins gained the confidence in himself to continue going and complete the course.

“A sigh of relief came through and I could feel the confidence push through and make it to the top of all that confusion,” Hawkins said.

Seeing Cadets gain confidence in their abilities is Sim’s favorite part of the training. 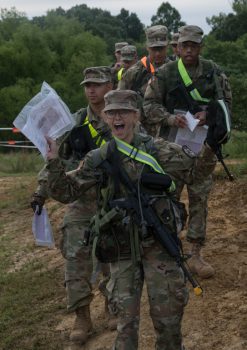 “My favorite part is when the Cadets come in and come to the grading tent and get their scores,” Sims said. “They were a little nervous before and they get three out of four or four out of four and you get to watch their faces light up. They have practiced this at school and here and they know that they have accomplished something.”

Not only are confidence and perseverance important to completing the land navigation course, but they also will play a role in the Cadets future as Army officers.

“As leaders we have to perseverance, not everything will be handed to you on a silver platter,” Sims said. “Being able to have perseverance and work through your problems is very important for leaders today.”

Hawkins said that Army gains strength from leaders who persevere.

Morrow said she hopes that confidence will help her lead and widen her impact on the Army.

“Confidence will impact me by allowing me to lead others efficiently and effectively and allowing my superiors to teach me even more so I can continue to help others.” Morrow said.