“My favorite part about this training is that you are not limited to how many bullets you get to shoot,” said Stacey Estrada, from Weber State University, “If you are not doing so great and you need extra practice, we have the supply here to keep practicing and to keep getting better.”

And practice they did.  For the last two days Cadets from the 3rd Regiment, Advanced Camp shot round, after round, after round improving their shooting skills at the George Blair Shooting Range. All their practice leads to their weapons qualification tomorrow. 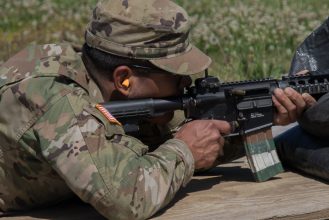 Fort Knox uses a location of missed and hit (LOMAH) system so that Cadets know how to improve their shooting capability and accuracy. The rifle that Cadets shot with is programmed to individual computers.

There are trackers connected to the computer to precisely specify whether or not a Cadet shot left, right, low, high or if there is an issue with the rifle itself. Cadets are then able to correct what went wrong on their next attempt.

Cadets must shoot targets that are 25, 50, 100, 150 and 300 meters away from them. Just as they will do on the qualification range, the Cadets shoot from three positions: kneeling, prone unsupported and the prone supported.

Cadets shot 30 bullets at the pop-up targets.  More rounds were available if they needed additional practice.

Estrada said that this training is important since not many schools are able to prepare their Cadets to shoot. She also said that the LOMAH technology used is a huge advantage.

According to Estrada, the proper technique for shooting a weapon is not accurately depicted in movies, and people are often misinformed as a result.

She has shot a gun before coming to CST, but not an M4 Carbine, which is the rifle used by the Army. 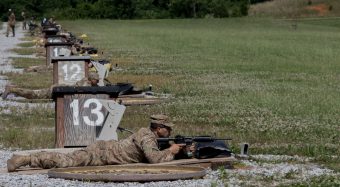 The biggest set back for Estrada has been her struggle to see far away. Although, she feels like many Cadets struggle with having confidence shooting the 300-meter target. The more she has practiced the better she has gotten.

“If you really listen to your instructor about how they say to do each little thing [from] the way you hold your rifle, the way you push down on the trigger or the way that you aim, it makes a world of a difference even though everyone thinks they already know it,” said Estrada.

Jake Schindler, from The Citadel, said, “This is important because it prepares us for qualification days so whenever we step on to the qualification range, we know that our rifles are going to hit exactly where we want them to.”

Schindler said that when he calms down, takes his time and corrects where he was looking in his sight, he will have a more accurate shot. When he rushes his accuracy diminishes.

It is important to Schindler to find the rhythm and keep a steady pace while training. 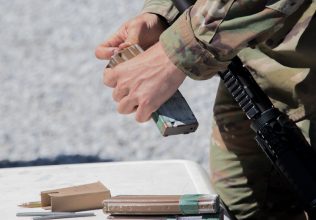 The day before his qualification, a Cadet from 3rd Regiment Advanced Camp fills his magazine with bullets before practicing to shoot pop-up targets at the George Blair Range at Fort Knox, Ky., June 11. | Photo by Matthew Billiot, CST Public Affairs Office

At the beginning of this training, Schindler had a difficult time shooting the 100-meter targets, because of the arc of the bullet. He realized he had to aim lower and once he did that he was able to hit the target. Learning to adjust his angle of fire was the most difficult part.

During the school year, Schindler took a trip to Fort Jackson, South Carolina, where he visited a shooting range. A range similar to the George Blair Range used during CST.  He said because of that visit he was better prepared and knows what to expect tomorrow.

And if his last 10 rounds are any indication he’ll do just fine during the qualification.

Schindler successfully shot eight out of the 10 300-meter targets.

“It is a good feeling when you can hit the farthest target over, over and over again, and it builds confidence,” said Schindler.

The Making Of A Leader