FORT KNOX, Ky. — With the end in sight, 1st Regiment puts all they have learned to the test at the Situational Training Exercise (STX) lanes.

Cadets from 1st Regiment began their first day of Field Training Exercise (FTX) by going through the six different STX lanes. Each lane was set up to put the Cadets in six different situations that tested how well they could operate tactically as a squad.

Master Sgt. Conrad Vasquez, from the University of Oregon, has been a part of the Cadet Summer Training (CST) Team at the Wolverine area of operations for three years. He was also the Operations Non-Commission officer (Ops NCO) who assisted the Senior NCO at the range to make sure the training went smoothly.

He explained that here at Wolverine the Cadets get a refresher on squad tactics so they will be prepared at the other AOs, Grizzly and Panther. 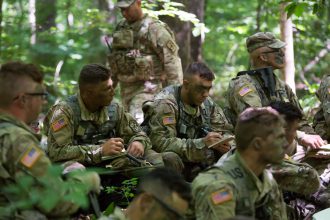 “They use these tactics and field training as a metric to assess them for their leadership skills because it puts them in a stressful environment,” Vasquez said. “So, the thing is, is that it can be easy like if you’re at a campus, at ROTC, you’re like yeah this is easy and it isn’t really the Army. But once you are in the woods, under these living conditions and under stress, that’s when true leadership comes out.”

For the Cadets, this refresher was a great way to finally see exactly what was expected and how they were to perform out in the field.

“I think, as a group, it’s important for us because it’s our first real opportunity to see how, as a platoon, we function in a tactical environment,” the Norwich University Cadet said. “And I think with the aid of the Cadre within our first few STX lanes is also very important because they show us different aspects of the tactical atmosphere that they have experienced in real life. They then apply that to us as Cadets facing training and that gives us the opportunity to make mistakes and them give us feedback on that.” 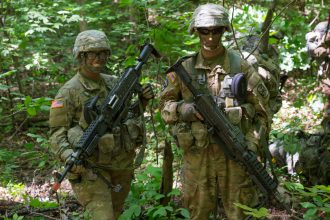 Cadet Emiliana Angola also gave her thoughts on why this first day was so good for the Cadets as well as offered advice for those coming after her.

“I think it was really cool to get to see what they expect from us without there being any pressure to perform as you normally would,” the Princeton, New Jersey, native said. “So now I feel more excited for what’s to come because I know what they want to see and how it’s going to go. Even if I don’t know exactly what we are going to do when we get there. I think it was a confidence booster.”

“Have a positive attitude,” the Clemson University Cadet added. “It’s not a bad time if you don’t make it one. Bond with your peers, they can really make or break your experience out here.”

Getting to know one another was something another Cadet, Seth Gunter, from the University of Illinois at Bloomington-Normal, added on to, to give an idea of why that can “make or break your experience.”

“We’ve spent the last two weeks getting to know each other and we have all become pretty close to one another,” the Germantown Hills, Illinois, native said. “We all bring certain things to the table in terms of knowledge, tactics and all of these military tasks. Finally, I think we sit in a classroom teaching environment. But this is a really good cultivating event where we get to take everything we have talked about and put it into a real setting. Actually do the things we have talked about and then continue to develop each other and learn from each other. Yeah I think it is cultivating into more of a team and cohesive unit.”

As Gunter had said, being in the field and in a real setting, did help a lot for those who didn’t always learn from classroom settings. 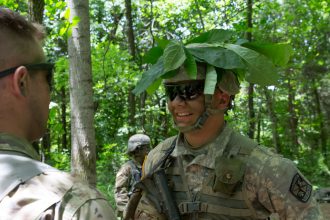 Robert Englander, from Levittown, New York, was one of those Cadets.

“Yeah I’m more of a hands-on kind of person,” the Virginia Military Institute Cadet said. “So, I like it when you go out to a field and hit the ground running. I feel like you learn a lot more than you would explaining something to someone because not everything goes as planned.”

“I think it was also important because we are knocking the rust off and not a lot of us have done field training in a while, and others have done this training at all,” Gunter continued. “We can finally run through the motions rather than just talking about doing it.”

Dillon To, a Des Moines, Iowa, native, gave one last word on why this all helped as the last step in the Advanced Camp journey.

“It’s really nice to have a Cadre here to help guide us through all the tactics just so we know and cross our T’s and dot our I’s as we prepare for our upcoming FTXs,” the Drake University Cadet said. “I think it is a good culmination of all the previous trainings we did since we arrived at Advanced Camp. From Land Navigation to Rifle Marksmanship, it’s a really good way to test all our skills that we have worked on. Not only here but the last three years of our ROTC programs as well.”