Fort Knox, Ky. — At 16 years of age most people are worried about getting their driver’s license, Cadet Daniel Cole was finding a place to live and trying to join the Army.

Cadet Daniel Cole, from the University of Hawaii at Manoa, shares a light moment before he begins his night land navigation with fellow 1st Regiment Advanced Camp cadets at Fort Knox, May 28, 2019. | Photo by Jodi Moffett, CST Public Affairs Office

Cole is from Fayetteville, North Carolina and attends the University of Hawai’i at Mānoa.

Growing up with his father in the military, Cole always had an interest in joining the military, but his route to Advanced Camp, Cadet Summer Training was anything but traditional.

“I come from a military family, my dad was in the military,” Cole said. “It was always the plan that I was either going to be an actor or go into the military, and as I got older I kept on thinking ‘I am going to act.’ Then, I moved out, I moved out when I was 16 due to some confrontations with my parents and thought, ‘I guess the military is going to be the move for me because acting is not really working out because I am 5’6.’”

Moving out at 16 was just the beginning of Cole’s journey. After finding a place to live, Cole faced a new trial.

“I had no support and was living in someone’s basement that I rented out for $200 a month,” Cole said. “It was at this point that I realized, when my parents homeschooled me, we grew up in the Bible Belt, I found out that I only had a seventh grade education at the age 16 and that I would need to get my GED because there was no actual, physical proof that I had been educated in the home.”

“I studied for the GED test and failed it four times and then went to the recruiter and told him my situation and got told, ‘You really need to pass your GED first,’” Cole said. “I failed four times and on the fifth try I finally got it.”

After obtaining his GED, Cole went back to the recruiters and was ready to finally join the Army. Or so he thought. 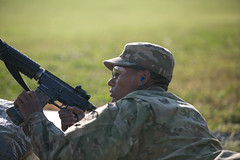 “I went back to the Army recruiter and at that time the Army was downsizing. They said ‘We can’t take you with just your GED now, we now need you to go to college, we need you get to two semesters worth of college credit,’” Cole said. “I was super discouraged at this point because I was not very confident with myself and had been through a lot.”

Cole signed up and made it through his college classes and finally joined the Army. Looking back on his journey, Cole recognizes just how far he has come and is grateful for the military’s role in his development.

“You go from someone who is uneducated, has no place to live, has no family or friends to support them and now I have wonderful people to call friends, money in my bank account I can take myself anywhere I want to go, I have been able to travel everywhere with the military my education has been paid for, and I am extremely thankful the military has made that possible,” Cole said.

After joining the Army and spending some time moving up the ranks, Cole decided to take his journey in a new direction. Cole decided to apply for a program to allow him to become a Cadet who will commission as a second lieutenant.

“I was doing well in the Army and I ranked up really quickly [to an E-6 rank] and was stuck in a job that I did not really enjoy,” Cole said. “I was a transportation coordination specialist. We deal with everything logistically from the rail, to the port, to the sea, to the train and planes. If it moves, we deal with it. Once you reach a certain rank in your Army MOS, you can’t really reclassify or change your job. At that point, I had maxed out on the rank and couldn’t change my job. At that point, I decided that I had cemented my leadership skills and was at a place where I was ready to apply for the program and do something different.”

After two long months of waiting, Cole received the news that he had been accepted into the program.

Cole joined the program in August of 2018 and will commission in May of 2020.

“Advanced Camp is a great place for networking, that is what I see it as is a networking opportunity,” Cole said. “A lot of these thing that we are learning out here I do have prior knowledge of, but I am always trying to keep an open mind and learn something new. There have been a few new things that I have learned out here.” 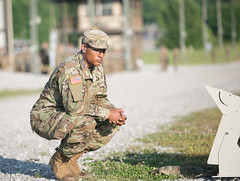 Looking back on his journey and everything it took to get to Advanced Camp today, Cole wishes he could tell his younger self to believe in himself.

“What I would tell myself is not to give up,” Cole said. “There are times when I first began my career where I gave up too easy or doubted myself and I think I would have been the program a lot earlier if I had believed in myself.”

A Direct Approach to Indirect Fire

The Army is a Team Sport