Fort Knox, Ky. – It was a long climb up the stairs for the 4th Regiment Advanced Camp Cadets this morning.

From the ground to the top of the 60-foot rappel tower it’s 80 steps.

Depending on one’s anxiety level it was either a quick walk up or a slow shuffle.

Cadet Jacob Drobney, from Atlanta, Georgia, who attends the University of North Georgia, said the signs with Army values motivated his climb. 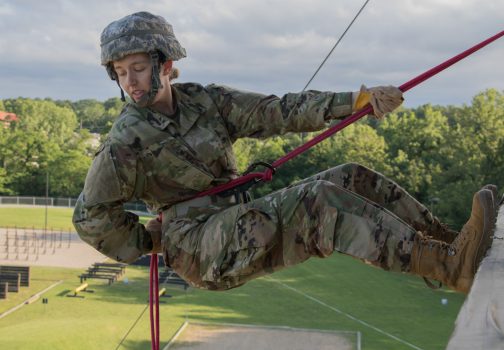 “As you are walking the stairs up you can see the leadership qualities like loyalty, duty, respect, selfless service, honor, integrity and personal courage,” Drobney said. “Going up there is kind of nerve-racking but you see those and you look down and get an adrenaline rush.”

Cadet Joe Settineri, from Homer, New York, and attending St. Lawrence University, said he was simply thinking of the weather.

“I was making sure my seat was tied correctly and [thinking] it was such a nice day out really,” Settineri said.

Cadet John Catalano, from Cincinnati, Ohio, who is a student at Bowling Green State University, said he had anxiety building up.

“There is anxiety, you have adrenaline pumping,” Catalano said. “It is nervousness in a good way.”

While it may have been a long climb up, Cadets had short trips down the rappel tower. 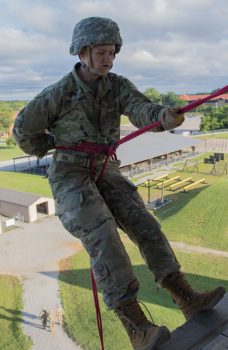 For some Cadets this was just another day, for others this was a leap of faith.

Sgt. 1st Class Justin Davis, the Noncommissioned Officer in Charge (NCOIC) of the rappel tower, said the Army value of personal courage was crucial to this training exercise.

“When you are rappelling from a 60-foot tower and you have to lean out backwards and posture yourself into an ‘L’ and then lower yourself with a brake hand it takes personal courage,” Davis said. “You are well aware if you fall, you could become injured. A lot of these Cadets are also afraid of heights but this is something that they have to do. They have to push through that and push forward to accomplish it.”

Within a few hours all the Cadets had descended the tower multiple times.

“It was kind of a sense of relief and sense of exhilaration at the same time,” Catalano said. “The worst of every rappel tower is being at the top and leaning over the edge, but once you get down you realize it wasn’t that bad to begin with and you have all that adrenaline pumping.”

For some reaching the bottom was the best part of the experience.

“My favorite part was getting down to the bottom,” Drobney said. 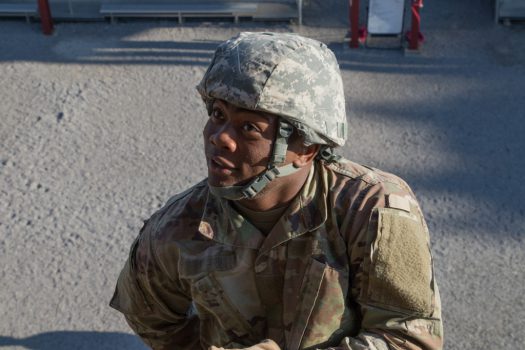 Settineri enjoyed the feeling of accomplishment that met him at the bottom of the rappel tower.

“It is always exciting to rappel down and feel like a superstar,” Settineri said.

Who’s Afraid of the Dark?