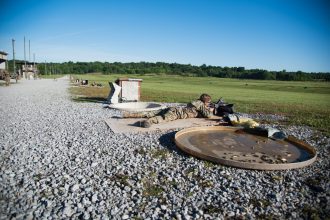 3rd Regiment, Advanced Camp Cadets shoot at targets during Weapons Qualification at the George Blair Range, June 14, at Fort Knox, Ky. In order to qualify Cadets must hit 23/40 of the targets and to reach RECONDO they must hit at least 30/40. | Photo by Catrina Dubiansky, CST Public Affairs Office

Basic Rifle Marksmanship training is a four-day process, starting with preliminary marksmanship instruction and culminating with weapon qualification. Over the course of the four-days Cadets built their confidence and skill with their assigned M4 Carbine.

“The four-day progression model that we have starts very basic, PMI teaches them how to take it [the rifle] apart and how to handle it,” said Master Sgt. Don Oakes who is an instructor at North Carolina A&T State University.  “And each day they build their confidence.”

To qualify Cadets must aim and hit 23 out of 40 targets that pop-up on their 300-meter firing lane. Oakes said the Cadets fire from three different positions: prone supported, prone unsupported and kneeling.

The Cadets get 20-rounds to shoot with in the prone supported, which allows the firer to use sandbags to support the weapon, and 10-rounds for the other two positions. Targets pop-up up one-at-a-time or in pairs. 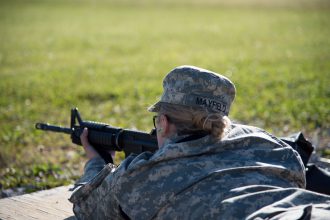 Oakes, who said the qualifying rate so far through Advanced Camp is about 70%, with many cadets struggling when shooting from the prone unsupported position.

“I think kneeling is the hardest,” said Cadet David Heller, who attends Baylor University. “Maintaining balance is a lot more difficult and you don’t have something to rest against or a platform.”

The positions aren’t the only thing that adds pressure to the Cadets to qualify. Some Cadets are vying for RECONDO status.

Cadets who meet all the RECONDO requirements are recognized at end-of-camp graduation.  The rifle requirement is for  the Cadet to shoot sharpshooter, hitting 30 or more targets.

“RECONDO takes the best of Advanced Camp and pushes you to the limit, its like an extra incentive to do your best in all of the events,” said Cadet Justin Massey, who said he remains in the running for RECONDO status.

Massey, a student at the University of North Georgia, scored a 32 out of 40 on his first qualification attempt 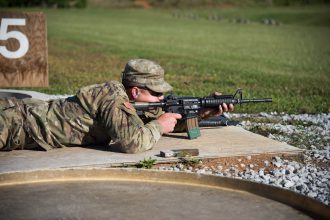 “I didn’t have [RECONDO] as a goal of mine when I came here, up until a couple days ago I still did not have it as a goal of mine.  It just kind of happened that way. It’s just normally how I preform on these events,” said Massey.

Massey said he is busy focusing on helping everyone in his platoon more than earning this honor.

“By just preforming to your best ability you just need to push it to the back of your mind,” said Massey. “Really stop thinking about it [RECONDO], think about benefiting the platoon and anyone that needs help.”