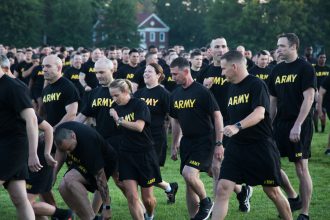 FORT KNOX, Ky – “Many people celebrate their birthday sleeping in and eating cake, but not us,” said Command Sgt. Maj. Mario Terenas. Fort Knox didn’t sleep in late this morning but began it with a three-mile run and a Streamer Ceremony marking the Army’s 244th birthday.

“Starting at Bunker Hill all the way through Baghdad, there’s nothing like us anywhere,” said Evans. “You can be rightly proud to be standing here as a part of the Army’s almost 1.5 million people that make up our Army’s soldiers and civilians, active duty, National Guard and reserves, and I am exceptionally proud that we have all those components represented here at Fort Knox, Kentucky. HOOAH!”

Soldiers, civilians and their family members participated in the formation run that took them around Fort Knox. Upon completion of the run, the formation held a ceremony honoring its history. 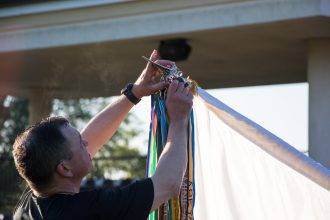 As a narrator recapped the history of the Army through it participation in the nation’s war, members of the Ft. Knox Sgt. Audie Murphy Club affixed campaign streamers to the Army Flag.

At the end of the ceremony, 190 streamers hung on the flag.  Each one representing the history and sacrifices made by Soldiers.

Evans said, “when someone threatens our safety and we have to crush their very souls, we send the United States Army.”

The American people have served in the Army since its birth in 1775, and the Army has done the same for her soldiers as well. She has provided her soldiers with opportunities to gain leadership, educational, and professional skills while gaining appreciation for other cultures. 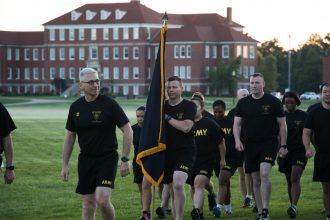 “It [the military] has helped me be a better person,” said Staff Sgt. Tawina Dotson, a human resource specialist. “It allotted me the opportunities I don’t think I would’ve had otherwise.”

It’s more than cake and ice cream during this birthday celebration. But more about the remembrance and appreciation for the pride military members take in the privilege they have to serve and protect America, as well as the service displayed before them.

“This is a big deal for our Army. A lot of people let this birthday go by. They don’t think much about it, but I’ll tell you for 244 years we’ve been the most awesome land combat power in history,” said Evans.