The Cadets from 1st Regiment, Alpha Company took part in Field Training Exercises (FTX) to showcase the skills they have learned in Advanced Camp.

FTX is a graded mission where Cadets are assessed on how they handle certain leadership positions and the mission itself. The Cadets have just completed day one of the walk phase, which is a part of the crawl, walk, run development technique used to teach information that builds upon each other.

Sisson continued, “Their objective can range from anything from the scenario we just saw, which was an attack. They could get a defend, they could get an ambush, a raid, so it just really depends on whenever we get the op 4 to assimilate to the platoon, whoever the platoon leadership is. That is when they find out, and go plan from there.”

Spc. Brandon Rivera from Echo 321 who was a member of the OP-4 (Opposing Force) explained his role. He said, “We are pretty much acting as OP-4, training the cadets in possible scenarios. Defending and pretty much ambushing them, trying to find a weak point. So, they can strengthen those points from there.” 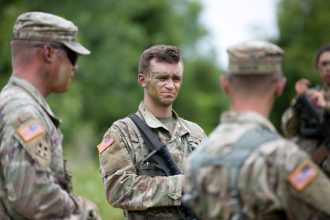 Little, who was the acting PL (Platoon Leader) talked about how to prepare for FTX. He said, “Hopefully your school prepared you enough to where when you get here you know what you’re doing. But honestly once you get here, if you don’t know anything, just study the Ranger handbook. Even if you know everything, I would study the Ranger handbook. Try to understand the operations and battle drills the best you can.”

When asked about how his team did Little answered, “Not very good. We didn’t meet the time hack, we didn’t take any casualties, but we were originally supposed to be done with the action zone at 12:30, it is currently 12:46. So we were a little bit late on the time hack like I said. But other than that, I think Action zone went fairly well considering how slow, late, and rushed the planning was.”

Cadet Brayden Hembree attends The Citadel, was one of the squad leaders for the mission. The Lexington, South Carolina native said, “So basically, I was 4th squad leader, which is the weapons squad leader. It is usually our job to provide heavy gun support to the mission. Aside from that, as a squad leader it is my job to delineate information from the PL to the average joe. Just so you have that flow of information.” 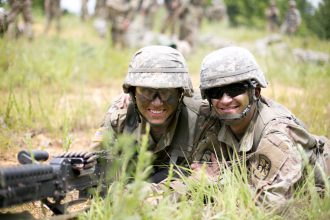 That flow of information did not come easy during this mission. Hembree explained the challenges his group faced.

He said, “It was pretty hard because we had some com issues, and since weapons squad is the only squad that is split up between gun team one up at the front and gun team two at the bottom. Since coms weren’t working, we were basically getting bad information flow back and forth. It was hard but we did everything we set out to do.”

Cadet Louisa Uribe attends Methodist University and is from Lakewood NJ. She did not have a leadership role in the mission and gave her perspective on how it went.

She said, “So this last mission was kind of difficult, because we really didn’t know what was going on. It felt like we were kind of blind because the information wasn’t really getting passed on. It’s not that our squad leaders were not doing the right thing. But from the time they have to come back and tell the whole squad, it’s just not enough time, because they have to make the movement that the PL is telling them to make. So, from that aspect it is really hard when the radios are down and not everybody is getting all of the information.

With the Cadets in from 1st regiment now entering day one of the panther phase, they still have six days left in the field.