“The range is hot,” yelled different Cadre as the Cadets began firing their rifles.  Last week, 4th Regiment completed Preliminary Marksmanship Instruction (PMI) training where they familiarized themselves with their M4 Carbines.  Today, they gathered at Canby Hill Range to zero their rifles.

For some Cadets, zeroing their weapon is an unfamiliar skill they have yet to practice, but many Cadets from the 4th Regiment have had a wide-range of experience with rifles.  Today allowed each Cadet to make adjustments to zero their weapon, based on the shots they fired at a target. 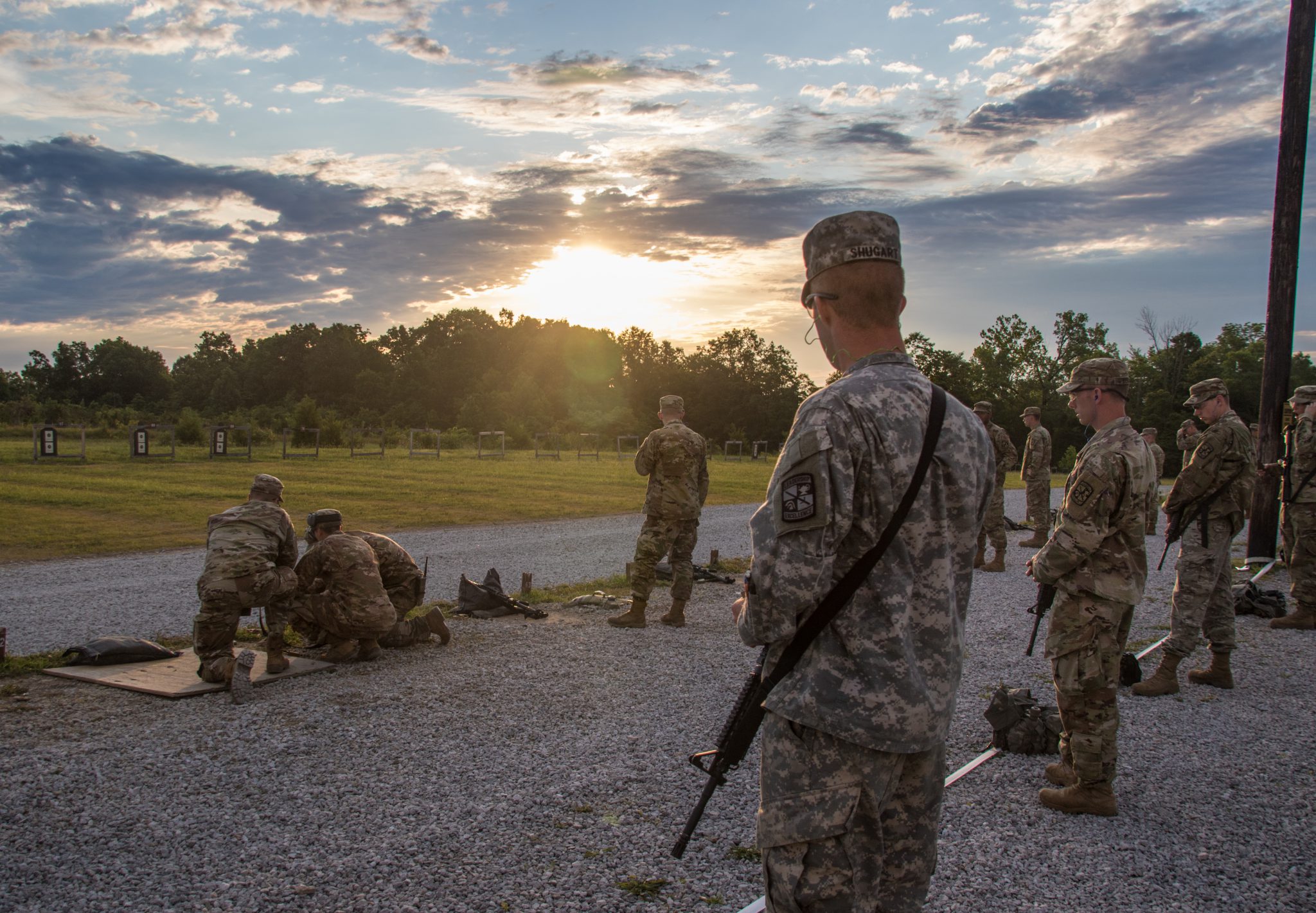 Cadet Sinai Erazo arrived at Fort Knox around this time last year for Basic Camp.  Her experience with M16 rifles last year gave her some knowledge on zeroing, but at Advanced Camp, an M4 rifle is used.  The Grand Canyon University Cadet was not able to zero in her weapon after her first attempt. “The butt stock adjusts, which is a good thing but I didn’t have my butt stock the right way so I have to reshoot,” explained Erazo. 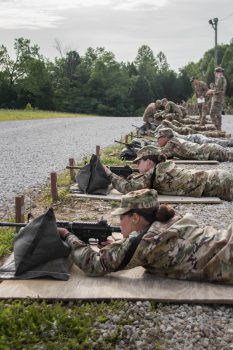 Many Cadets focused on the fundamentals of marksmanship. Some tweaked their trigger squeeze, others looked through front and rear sight posts for a better picture, while some adjusted their body position, and controlled their breathing.

Erazo wasn’t the only Cadet to have experience with an M16 rifle.  Cadet Cameron Taylor attends the University of North Georgia, where the ROTC program uses M4 and M16 rifles at ranges every month.  “It comes down to pulling the trigger smoothly, controlling your breathing, and making sure you’re in a position that you’re comfortable with.  Just have fun with it and be open to learning,” advised Taylor.

Paul Cribbs, a Cadet from Florida Southern College, also has some experience from his university, and grew up shooting different types of rifles. He advises incoming Cadets to slow down and focus at the range, saying “squeeze the trigger really slow. Then release it at the very end so slow that you can feel the click when it comes up because it lets you know that you fired the round and you’re not jerking the trigger.”  Cribbs, who hopes to be a future armor Officer, found this training very valuable.

Cadet George Burgerson came to Advanced Camp with skills from a different type of rifle. In 2017, the Georgia State University student competed in the Air Rifle Junior Olympics.  “I didn’t place nationally, but it was an experience to be able to go and compete with people who were way above my level,” said Burgerson. 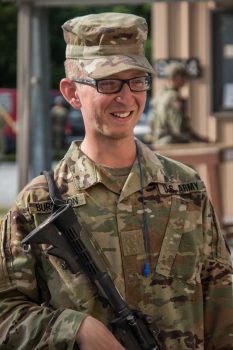 Though there is a large difference between air rifles and the M4 rifle Cadets use at Cadet Summer Training, Burgeson is confident in the fundaments of marksmanship because of this experience; however, he was still nervous about qualifying his weapon. “I can definitely do really good on [alternate qualification], but pop up is really difficult for me. I’m not used to having a time limit per target. I know I’ll qualify, but I at least want sharpshooter, that’s my goal,” expressed the Georgia State University Cadet.

Cadet Tyler Scott served as a Signal Support Systems Specialist in the Army and zeroed his weapon after his third, five-round magazine.  He explained how beneficial this training was because each Cadet has different levels of experience with rifles. “It brings everyone to the same level,” said Scott.

The Wright State University student always had the intention of becoming an Officer in the Army when he enlisted.  “I wanted to get that experience at the bottom to go up. If you can’t learn how to follow, then you can’t learn how to lead.  I am a much more confident leader. I’m really good at my soldier skills because I’ve had the last five years to practice them,” said Scott.

However, Scott’s father, a retired airman with twenty-one years of service, and brother, an Air Force Captain, were not the most supportive when he first made this decision.

“The benefits to Army ROTC, the character it builds in you, that’s what inspired them [his family] to get onboard, and it has changed me as a person. I went from a 2.0 GPA in high school to over a 3.0 in college. I’m much more dedicated and much more focused and that’s because of the Army,” explained Scott. 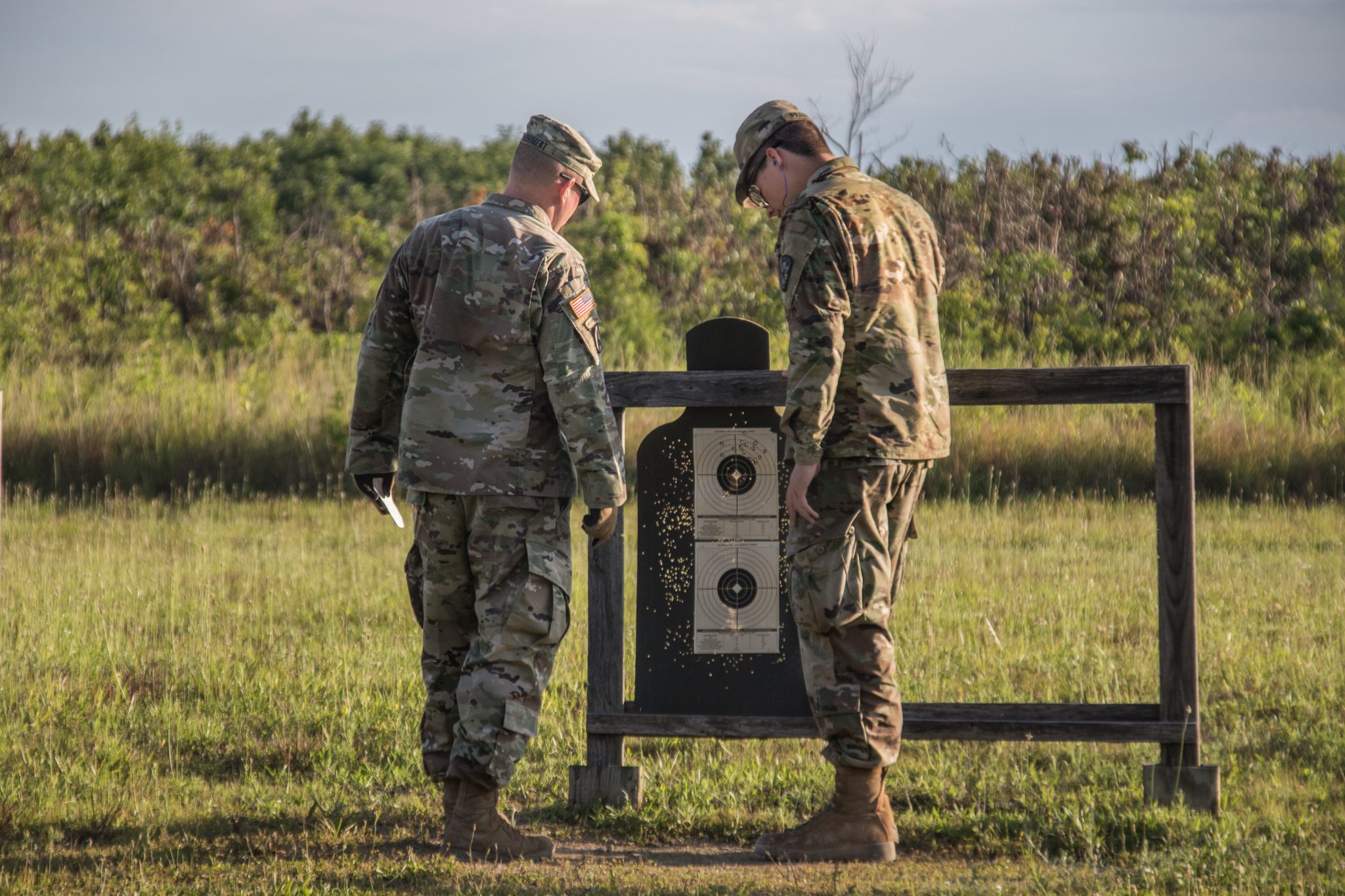 Cadet Jacob Franklin, from The Citadel (right) reviews his grouping on the target after firing his weapon at Canby Hill during weapons zeroing at Fort Knox, June 15, 2019. | Photo by Jodi Moffett, CST Public Affairs Office

“I saw the type of people who were in the military and the values that the military holds. Over time I started liking the environment more and more because there’s discipline and I thought that was something I really needed in my life,” explained Erazo.  After joining ROTC, she raised her grades and wasn’t getting in as much trouble.  Erazo expressed how thankful she was for her parent’s support, even if it wasn’t immediate. “Over the past few years, they’ve seen what I’ve become and how much passion, interest, and effort I’ve put into this. My mom is actually coming to the graduation, she didn’t come last year but she’s coming this year,” said Erazo with a smile on her face.

Although some Cadets come from families nervous about their decision to become Officers in the Army, there are many that come from military families, influencing them to join.  This is true for Cribbs and Taylor.  Cribbs was heavily influenced to become an Officer by his father, who was a soldier during Desert Storm.  Taylor’s father is a retired Army Colonel.

“I’ve moved nine times… It’s kind of like a family thing and I just want to give back. I’ve done it my whole life so might as well continue,” said Taylor.

12-Mile Foot March: The Ruck that Feels a Little Lighter