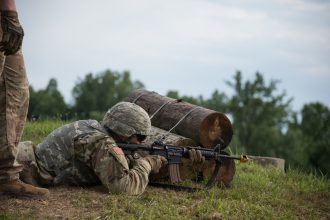 Cadets navigated the course today using blank ammunition, working on their communication and movement techniques.  Tomorrow they’ll negotiate the same 100-meter lanes firing live rounds.  Throughout their run down the lane the Cadets engage targets while moving to cover provided by wooden walls and logs.

Cadet Brian Driscoll from Wilks University explained how they run through the lanes in buddy pairs; they run individually while your partner covers you.

They low crawled and high crawled to their cover, while bounding toward the enemy.  The lane culminated with each Cadet throwing a dummy grenade at a target.

It is essential for Cadets to communicate throughout the lane. Cadets yelled out “cover me while I move” and “I’ve got you covered” as they were going through the course.

Yelling out the different commands helped the Cadets work as a team and built that confidence in their battle buddy to get the mission completed.

“We work as a team and we try to be as coordinated as possible,” said Cadet William Outzen from Eastern Illinois University.

Buddy team live-fire is a high-risk environment as the Cadets use live ammunition. 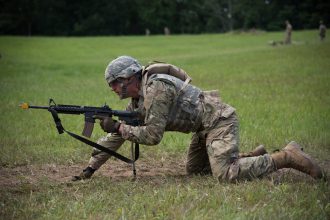 The practice sequences helps Cadets build trust in their partner and can have assurance “that you know where she is and she knows where you are; but you have to trust that they get there in a certain amount of time,” said Cadet Sarah Loret, University of Mississippi.

Confidence is just as important as trust for these Cadets. For some this is the first time they are handling a weapon and maneuvering in with the added pressure of having a partner. Having a partner and going through the course by working together helps them be confidence in themselves, in others and their weapon.

Cadets will take this knowledge and experience that they learned at Cadet Summer training and use it in their future Army careers.

“We are going to be entering into new units that have already bonded together and we have to be able to go in an trust them,” said Austin Eggers from University of Houston.