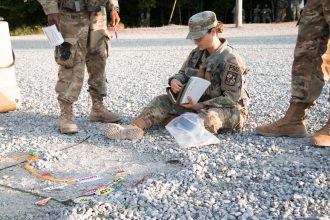 A 2nd Regiment Advanced Camp Cadet, Jordan Rutz from Arizona State University maps out an ambush plan for when they head out for FTX at Fort Knox, KY on June 15, 2019. | Photo by Hannah Hedden, CST Public Affairs Office

An SOP is a plan Cadets will use in the FTX while conducting missions. With an SOP in place, everyone is on the same plan and it will be easier for the platoon to defend its territory against the enemy 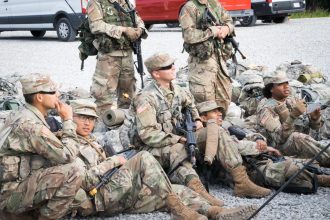 2nd Regiment Advanced Camp Cadets listen to instructions for the SOPs (Standard Operation Procedures) for when they go out into the field for FTX at Fort Knox, KY on June 15, 2019. | Photo by Hannah Hedden, CST Public Affairs Office

“My plan is, appealing to everyone and someway shape or form, to bring motivation and breaking up the monotony,” said Lanting. “Lately, it’s been a lot of classes and I think breaking those up, making sure people are all active and it’s not a few people that know what they’re doing it’s everyone participating and I think that brings up morale in its own.”

Lanting knew that his platoon needed a boost of energy, because many could just say they were tracking because they are tired and ready for rest. He implemented four stations, including indirect fire and patrolling, that required the Cadets to rotate and practice to make sure that everyone understands the plan and SOPs.

At each station a squad leader and an instructor determined how the Cadets participated and reviewed the information required for their procedures. Coastal Carolina University Cadet Hannah Smith was an instructor and quizzed her Cadets on IDF before requiring them to respond to a simulated IDF attack.

Bradford University Cadet, Borian Moffo commented, “it’s become to the point where we’ve become a well-oiled machine that we’re just running through and killing it.”

All in all, 1st Platoon enjoyed how Lanting organized his training. 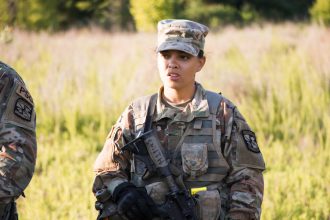 “I liked that [changing station] a lot because people were more alert,” said Cadet Lauren Archer.  “Usually if we are sitting in one place for hours people start falling asleep. They’re [Cadets] more refresh because they got to walk over here, they’re more prepared to listen and be more involved and they’re [classes] not very long either so their attention stays with us also,” said Archer, a student at the University of Arkansas.

Today’s training that Lanting put in place set the conditions for him and his team to be motivated and to work together during their upcoming 14 days of the FTX.