The night of June 14 was one for the books, as the U.S. Army marched into its 244th year, commemorating the day with the annual cake cutting. 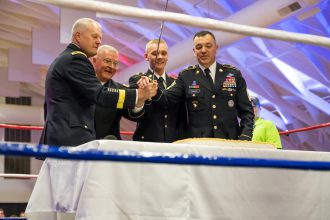 Each year, the Army’s birthday is celebrated with the cutting of a birthday cake, done by the youngest and oldest soldiers present. This year, 18-year-old Pfc. Zachary Partridge and 61-year-old Chaplain (Col.) Timothy Walls were given the honor of wielding that saber.

Celebrating the Army’s birthday is about much more than age, though.

“I think it’s important that we remember the Army colors, the guide on that has the United States Army’s emblem on it, the Flag, has got 190 campaign streamers,” Maj. Gen. John Evans, Commanding General of the United States Army Cadet Command and Fort Knox, said. “From Bunker Hill to Baghdad, 190 different campaigns over 244 years.” 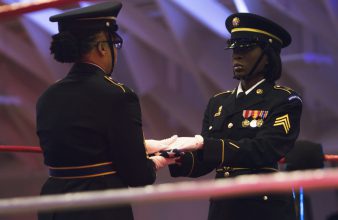 The people the Army has been privileged to work with, that’s who this birthday celebration is for. There are 1.5 million soldiers and civilians dedicating their time to this force, Evans said.

There are hundreds of thousands of people who have sacrificed their lives for this force.

They are celebrated on this day, and every day, in the Army.