Sgt. 1st Class Benjamin Hankins, who is a member of Cadet Command, explained the course. He said, “Field Leadership Reaction Course is (several) obstacles designed to challenge squad sized cadets. They will take turns in leadership positions. The intention is to challenge and make them work together for teamwork, communication, adaptability, and decision-making.” 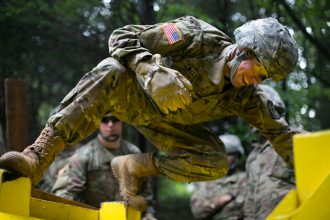 Hankins shared his advice for the Cadets, “A good plan executed violently right after planning phase is better than a perfect plan executed with five minutes left in execution phase.”

Cadet Albert Cain, who attends the University of Memphis and is from Brighton, Tennessee, was the squad leader for his group’s first event. He said, “The objective for our mission was to get a casualty across the (fake) river without touching certain parts of the obstacle. We had three boards to get him across and that was about it.”

Cain continued as he described the challenges faced during the mission, “The challenge was, in the moment, the plan that we originally had just didn’t work. And because of that, we had to rethink it on the fly, and that’s going to be what really hurt us. At that point, we were just kind of winging it.” 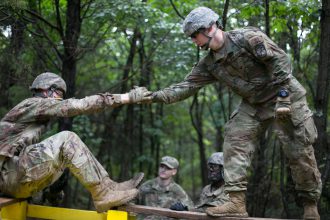 Cadet Jaquelin Rosas who attends Mary Baldwin University, had a different experience with her group’s planning. The Marietta, Georgia native said, “It was actually pretty easy, because everyone had a general idea.”

Cadet Zachary Hawkins is a member of the University of Central Missouri’s ROTC program, and is from Drake, Missouri. He talked about what it is like to take commands from his peers. He said, “Its always easy as long as you trust the person you are listening to. When it comes down to things like this, you just have to trust everybody.”

Hawkins had high praise for his team and their efforts, “Just working well together is something we do very well as a squad anyway, even as a platoon.”

The Cadets will continue to build their camaraderie and trust, which will be needed to hone their leadership skills here at Advanced Camp.